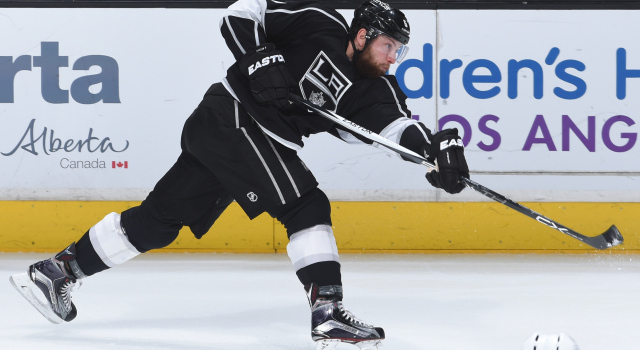 The Kings face the Vancouver Canucks tonight (7:00 p.m. / FOX Sports West / KABC 790 / I Heart Radio) having lost five of their last seven games in regulation and without the services of versatile defenseman Alec Martinez. For a read on tonight’s game, I spoke with Jake Muzzin and joined a media scrum around Jamie McBain. Their thoughts in advance of an important divisional match-up are below.

Jake Muzzin, on the team’s recent play:
Obviously we aren’t happy with how we have been playing. We are giving up way too many chances, goals, [and] kind of lost a little jam in our game and we have to get it back these last four games heading into the playoffs. We still have lots to play for, we still want to get first in the division, and push for that. Every game coming in now, we are looking at as must-win games.

Muzzin, on trying to end the recent slump:
We have been trying to look at some things. Personally, I was not playing well and I need to improve on the D-zone, shutting plays off and making good plays with the puck. I think we can all do a little bit better job of that and that goes a long way with our team.

On adjustments playing with Luke Schenn as opposed to Alec Martinez:
It changes a little bit. Obviously he is a righty, Marty is a lefty, so there is that. He is a big body and likes to play physical, so look to get in and play off that a little bit. Marty is a physical D as well, but maybe a little bit more mobile in the back end. Just looking to play a solid game and we are going to need that tonight. [Reporter: Knowing that, is that something you cognizantly think of, shift-by-shift, when you’re on the ice? Or does that come naturally knowing that you have a right-shot partner?] You think about it a little bit. D-to-D, neutral zone, on the point, behind the net he is a righty, not a lefty so you don’t think about it, you just know now that he is a righty. Maybe you do think about it a little bit, but not too much.

Jamie McBain, on staying game ready when he has been out of the lineup:
There isn’t really an easy way to do it. There is nothing like that can really compare to a game. Our trainers and coaches do a great job making sure off the ice that we are doing the right things and keeping our self in shape and on the ice making sure we are doing everything we can to kind of simulate the games and make sure that if my name is ever called then I am ready to go. So I feel comfortable and I am ready to go.

McBain, on the mental challenges of not playing:
It definitely is [a mental challenge]. I am honored to be a part of this group and whether I am playing or not it is a fun group to be around and it’s a culture that is exciting. Like I said, the coaches do a great job and I try and make sure I do the best job I can so if my name is called I am ready to go and I feel like I have done that.

McBain, on whether it’s easier to come back into a system that is so structured:
It’s definitely part of the culture and part of the systems that are run here and the expectation with everyone. It’s a five-man game all over the ice, and I think for guys to come back in and out of the lineup it makes it a lot easier just because you know where everyone is going to be, you know the structure, you know the system and you kind of fit right back in.

McBain, on the importance of getting into a game before the playoffs:
It’s that time of year, every point matters. We are neck and neck with Anaheim and battling back and forth and we have the big game coming up there. Everything is about preparing yourselves so that when the playoffs do roll around everyone is going on their top cylinder and we are ready to go.