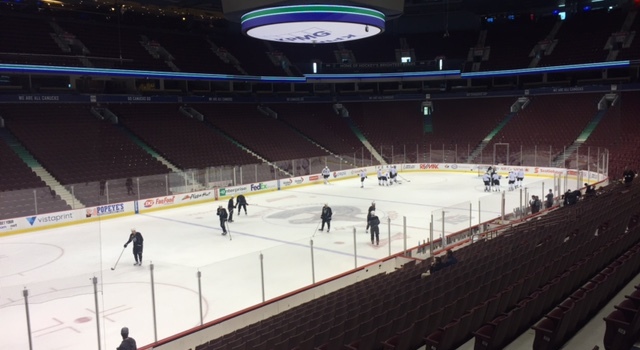 Good afternoon from the team hotel in sunny Vancouver. The Kings held a morning skate at Rogers Arena and aligned as such:

-Alec Martinez did not skate with the team and is “day-to-day,” according to hockey operations. It was expected that a defenseman could be questionable tonight given the Gravel recall yesterday and the word that there were a few “bang-ups” on the blue line; that defenseman is Martinez. Don’t expect him to play against Vancouver, though that he is of the “day-to-day” designation and traveled with the team on the trip is an indication that his bang-up isn’t severe.

Re Martinez – status is day to day
Me : Versteeg day to day or real day to day
Am told it is the latter

I may come up with a “Level Of Alarm Meter” over the summer. It would range from 1-10 on how concerned you should be over a particular development such as injury, rule changes, salary cap fluctuation or any other variable that could affect NHL teams to different degrees. If it were in place today, the Level Of Alarm would be fairly low, as Martinez traveled and is of the “day-to-day” designation. Unfortunately for the versatile defenseman, though, he won’t have a shot at perfect attendance. Along with Jake Muzzin, Drew Doughty, Dustin Brown and Tyler Toffoli, he is one of five players to have played in every game to this point.

-Jamie McBain, come on down. The puck-moving offensive catalyst hasn’t played since a four-game stretch against St. Louis, Nashville, Calgary and Edmonton – the team was 3-0-1 in those games – from February 18-25. His ice times in those games were 7:52, 7:15, 10:29 and 8:41. McBain fully acknowledges and accepts his role, though, and in meetings I’ve had with hockey operations, that understanding has earned him appreciation from his teammates, coaches and team executives. It’s not an easy role to serve; he hadn’t played in the last 18 games.

“It definitely is [a mental challenge],” McBain said of going stretches without playing. “I am honored to be a part of this group and whether I am playing or not it is a fun group to be around and it’s a culture that is exciting. Like I said, the coaches do a great job and I try and make sure I do the best job I can so if my name is called I am ready to go, and I feel like I have done that.”

-Jonathan Quick was the first goaltender to leave the ice and will start against the Canucks, as expected. Nick Shore, Nic Dowd and Kevin Gravel remained on the ice for extra work with Jhonas Enroth, so they’re most likely out of the lineup tonight.

-There are teams with injuries, and then there are teams that have so many injuries that it’s difficult to build regularity and consistency on a night-to-night basis. Vancouver is in the latter group. They’ll be without Sven Baertschi (lower body), Chris Higgins (lower body) and Linden Vey (upper body), all of whom did not practice yesterday, as well as Alex Edler (leg), Brandon Sutter (jaw) and Luca Sbisa (upper-body). Defenseman Andrey Pedan, who made his NHL debut in Los Angeles as a forward earlier this season, will again shift up front in a versatile move, while Jared McCann will shift from center to wing. Derek Dorsett (undisclosed) is expected to return. Canucks lines are expected to be D.Sedin-H.Sedin-Hansen, Dorsett-Horvat-Etem, McCann-Granlund-Virtanen and Pedan-Gaunce-Burrows up front, with defensive pairs of Hamhuis-Tanev, Hutton-Tryamkin and Bartkowski-Biega. Ryan Miller is expected to start in net. 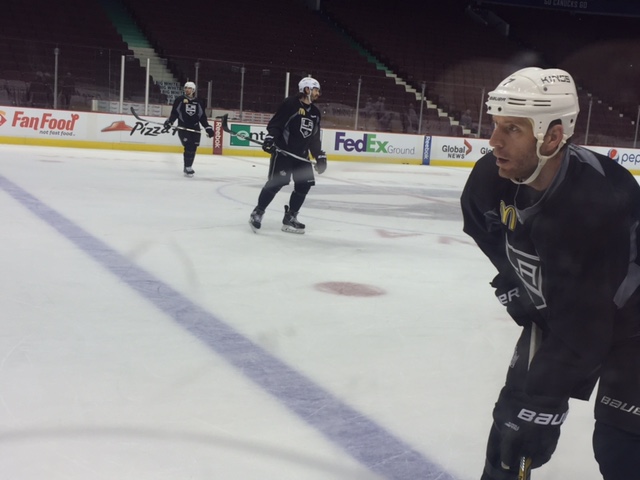