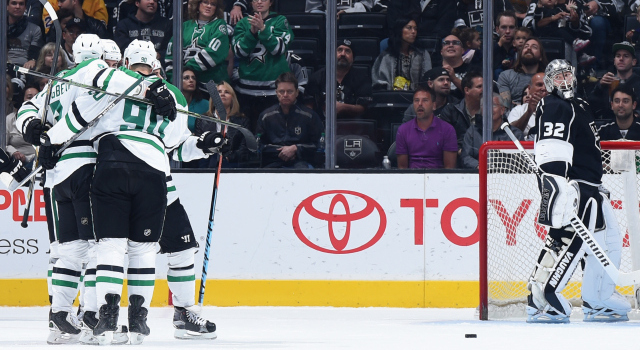 Wins and losses are never 100% influenced by any sole, determining reason, and while the officiating was poor on Saturday, the bigger issue against Los Angeles’ favor was that the Dallas Stars implemented their will in the offensive zone, operated with a clear possession advantage, effectively got bodies and pucks to the front of the net, created opportunities off forechecks to a greater degree, and finished with 39 shots on goal. The Kings could have still escaped with at least a point if not for some variables that appeared to be out of their control yesterday afternoon – more on that shortly – but they impacted their own fate with rushed decisions with the puck and the inability to avoid a heavy and relentless Dallas forecheck. Jake Muzzin was pressured into a delay of game penalty late in the first period as he flung the puck into the netting to the right of Quick, and Jamie Benn took advantage with a power play goal with under three second remaining to tie the game at one. In the third, with Los Angeles leading 2-1, Muzzin was pressured off the puck by Radek Faksa during a stiff forecheck emanating from an excellend shift from Faksa, Antoine Roussel and Patrick Eaves, and Eaves ultimately crashed the net and backhanded a loose puck past Quick to tie the game. On the game-winner late in the period, Eaves provided an effective feed as the Stars simply worked the puck back to the right point as Jordie Benn teed up a Patrik Nemeth feed and beat Quick underneath the intersection of the far goalpost and the crossbar. Though the game-winner came from distance, it came with a stiff netfront presence, and all three Dallas goals were representative of offense being produced from the net-out. They’re not necessarily highlight-type goals or end-to-end rush goals, but rather having big bodies low and around the net that create screens and second and third opportunities. The Stars were more effective around the net and below the dots in the offensive zone than the Kings were, and Kari Lehtonen recovered to make key third period saves as Los Angeles improved from a first period in which the territorial battle was most widely tilted to Dallas. 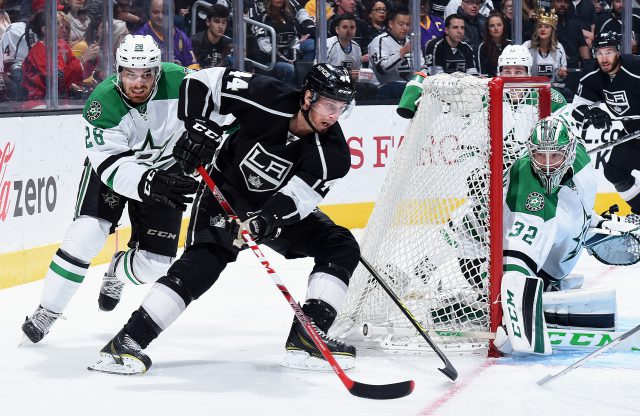 Still, the Kings had a chance to earn a point or two out of a game in which the Stars were quite good, and an on-ice variable that did not wear Los Angeles or Dallas jerseys impacted the situational development of the game and hamstrung the Kings from creating their own opportunities with the man advantage. I’m not talking about the disallowed goals, but rather the questionable decisions by the officials to A) pick up a flag after a clear too many men on the ice call was witnessed by everybody in attendance and confirmed by video replay, B) whistle Drew Doughty for a phantom high sticking call 17 seconds into a Los Angeles power play when all his stick struck was air, C) not call a clear trip on Jamie Benn after Tanner Pearson, during a Kings power play, had gained leverage on the forward and was making a move towards the slot before he was hauled down on a play in which Benn’s stick first caught Pearson’s skate before touching the puck, and D) not call a clear high sticking double minor on Radek Faksa after striking Brayden McNabb’s right eye well. The latter wasn’t a follow through, which would have negated the minor. Play happens very quickly in real time, but on the replay, Faksa had chipped the puck out of the zone, stunted his stick’s momentum before resuming its trajectory by raising it both up and towards McNabb’s face, and roughly one minute after the egregious non-call, Jordie Benn blasted the game-winner past Jonathan Quick behind Eaves’ effective screen. I opted to leave out the two disallowed goals, neither of which I found to have conclusive evidence to overturn the original call. That includes Dallas’ first goal, in which several blind spots may have worked against the Kings, including a reverse angle camera shot in which Jason Spezza’s stick blade blocked the view of the puck as he stickhandled it into the zone during the power play zone entry. While Eaves may very well have been off-side, there wasn’t clear enough video evidence to overturn the original call because Spezza’s blade made the puck disappear at the exact moment it would have needed to be visible to provide clear video evidence contrary to the original call on the ice.

The result was a missed opportunity, one of several that have plagued the Kings, Ducks and Sharks as the three California teams have been unable to surge ahead of a tightened, top-heavy Pacific Division. Anaheim, 3-2-1 in its last six, has closed the gap against Los Angeles (2-5-0 in its last seven) and has separated itself from San Jose (3-4-0 in its last seven). Recent results continue to reflect the likelihood that Thursday’s Kings-Ducks game at Staples Center will be enormously impactful on the division.