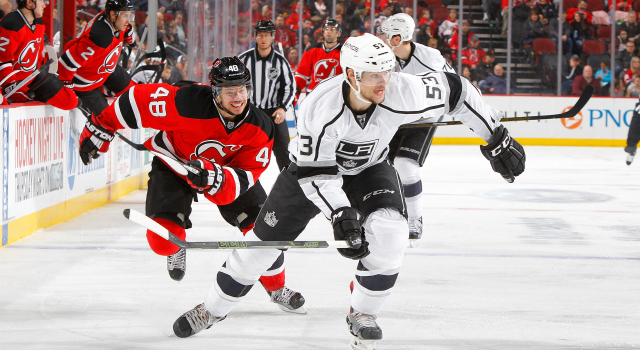 The Los Angeles Kings made a roster move on Sunday, recalling defenseman Kevin Gravel from AHL-Ontario, where he has recorded 20 points (7-13=20) and a +4 rating in 55 games. The 24-year-old fifth round draft pick from 2010 appeared in four games earlier this season against the New York Islanders, New York Rangers, New Jersey Devils and Washington Capitals and was held without a point while averaging 11:08 of ice time. Because there is no roster limit – only a salary cap – between the trade deadline and the regular season, no corresponding move was necessary.

Based on a brief conversation with hockey operations, the need for the call-up was spurred by several “bang ups” on defense. All defensemen traveled with the team, according to hockey operations, so there do not appear to be any serious issues. Rob Scuderi took his last shift of Saturday’s 3-2 loss to Dallas with seven and a half minutes to play, according to the play by play log, though I was told there’s no major issue with Scuderi. In a more high profile incident, Brayden McNabb was high sticked by Radek Faksa and underwent several stitches to the right of his right eye in a frightening incident that went unpenalized in the third period.

With the “bang-ups,” there are now several options at Darryl Sutter’s disposal on defense, and Gravel will provide the team with one final look before the playoffs start and, barring any rash of injuries, he’ll be back with AHL-Ontario for their Calder Cup run. Jamie McBain is also an option, though he’s a right-shot defenseman who generates offense. If the need is for a defensive-minded left-shot defenseman, Gravel would almost certainly get the nod. Los Angeles opens a quick, two-game back-to-back road trip in Vancouver on Monday night before traveling to Calgary to face the Flames on Tuesday.