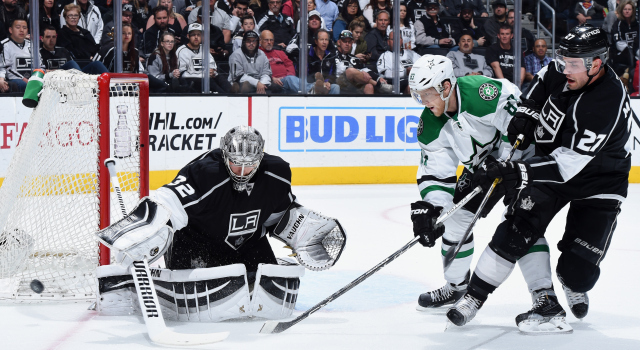 On the start of the game, and whether the Kings could’ve been down by a “couple goals”:
Yeah, probably could. They’re a high scoring team. I think they’re the highest scoring team in the league by a long shot, so I don’t think they’re a team that anybody wants to trade chances with. At the end of the day, you know what? You can talk about parts of the game, but you know what? Their forecheck, they’re a big team and they’re a real strong team and I think we shot the puck in the stands to avoid their forecheck and it cost us a goal, and we did it in the third period where we were avoiding their forecheck behind the goal line and it ended up in our net, and that’s the game. That’s it.

On whether it was difficult to generate momentum with all the scrums and stoppages:
Yeah, and with the coaches calling reviews. Actually, we tried it two or three more times. They finally caught on. Both teams, the officials.

On Jeff Carter:
I think Jeff’s line was really good again. We scored a four-on-four goal. Our five-on-five, through the lineup, was not good enough against that type of team.