Waking up with the Kings: April 1 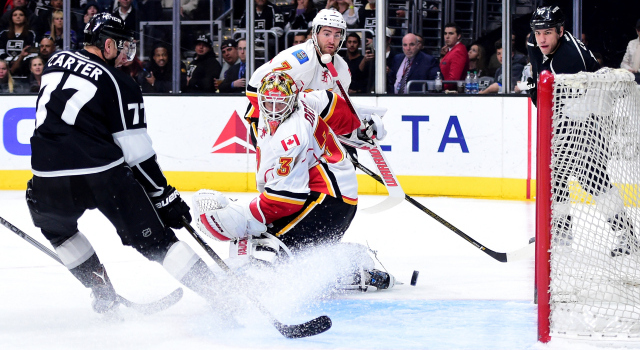 On Wednesday night, the Calgary Flames yielded eight goals to the Anaheim Ducks in a lopsided loss that was more or less decided early in the first period, when Anaheim led 3-0. It was clear, in the immediate aftermath of Wednesday’s game, that Los Angeles’ roadmap to victory on Thursday would take a far different route. Calgary was no doubt disappointed and embarrassed by its performance one night earlier, and despite having one of the younger active rosters in the league – the Kings are fairly young as well, as impressive as that is when compared against the background of their accomplishments – would rally together and forge forward with a much stronger 60 minutes than what was shown against the Ducks one night prior. There was scant chance that Thursday’s game would have ended as lopsidedly as the night before, and with the minimal travel up The 5, it was actually a set of circumstances that seemed to boost a team returning to action so quickly on the second night of back to back. That’s about where the Flames’ momentum or buzz ended, though, and after 15 minutes of the visitors getting up and down the ice fairly well, the Kings seized the final five minutes of a scoreless first period, opened the scoring in the first minute of the second period, and ultimately wore down the visitors to the tune of a 3-0 win by virtue of a strong collective performance in which scant time and space was ceded to the opposition over the final 40 minutes in play. All in all, it was the type of uneventful win that one would hope for over the final two weeks of the season with a playoff spot already clinched: With minimal mistakes, save for some questionable individual decisions, special teams success, solid goaltending and structured team-wide play.

The forwards with the two greatest impacts on the game were Jeff Carter and Anze Kopitar, both of whom finished the night clearly in the black possession-wise and consistently worked near the goal line and low in the offensive zone with the puck. According to War-on-Ice, Carter and Dustin Brown led all skaters with five scoring chances, while Carter’s three “high danger” chances were tied with Anze Kopitar for the most in the game as well. The possession battle was waged to its greatest success against TJ Brodie (-20 5×5 CF)(!) and Dougie Hamilton (-9), and if there’s a way to generate success against Calgary, it’s to hem Brodie in his own zone and ensure he isn’t able to have opportunities with time and space to advance the puck up-ice with a good pace.

Some of the window dressing around the game aligned with impressive individual accomplishments. A sharp Jonathan Quick tied his own franchise record, set in 2009-10, with his 39th win of the season; he amassed the 42nd career shutout of his career by virtue of a 21-save performance. Drew Doughty, meanwhile, surpassed Steve Duchesne for sole possession of second place on the team’s list of points by a defenseman when he recorded the 316th point of his career by assisting on Jeff Carter’s first goal. Duchesne, who recorded back-to-back-to-back seasons of at least 20 goals, totaled 25 goals and 75 points in the 1988-89 season and also etched his name into the scoresheet with a noteworthy assist against the Flames.