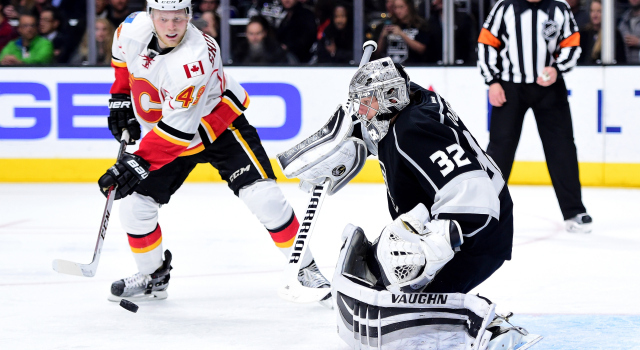 On any significance of moving back in first place:
Not really, no. [Reporter: Why not?] Because we won today.

On what he saw defensively:
We were really good last game, really good the game before, too, if you watched both games.

On Jonathan Quick’s shutout:
Good to see Jonathan get recognized and rewarded with that once in a while, isn’t it? Because he usually is our best player. Those three guys tonight – Kopitar, Carter and Quick – were pretty good.

On holding a one point lead over Anaheim:
We made the playoffs, so we’re doing good. When you think about it, we didn’t last year, and we were the second team to get in this year. That’s pretty good, isn’t it?

On Los Angeles, Anaheim and Southern California hockey:
Think all three teams, when you think about it, also. [Reporter: But they’re in the northern part.] You know, again, we go back to two of us didn’t make it last year. There’s been a lot made about the Canadian teams not making it, but we played a team tonight that went to the second round. You should give our team some credit for getting in instead of talking about the division and things like that. It’s sort of irrelevant, actually.