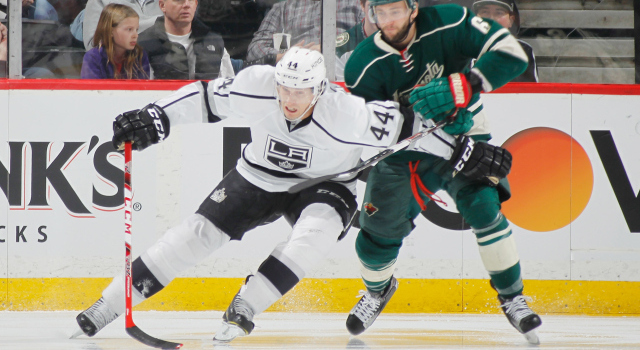 Elliotte Friedman’s excellent 30 Thoughts column on Sportsnet was published yesterday, and it contained several interesting Los Angeles Kings notes, as it often does:

10. I’m working the Ottawa Senators vs. Winnipeg Jets game on Wednesday night. Was hoping to see some Kyle Connor, but doesn’t sound like that’s going to happen. Bummer. By the way, it’s believed the Los Angeles Kings would have taken Connor if they hadn’t traded their pick to Boston in the Milan Lucic deal. Certainly, the rest of the NHL is disappointed they missed out.

Connor, profiled here by LA Kings Insider, ultimately went 17th overall to the Winnipeg Jets and posted 35 goals and 71 points in 38 games in his freshman campaign, marking the first 30-goal freshman season in NCAA Division I hockey since Thomas Vanek scored 31 times in 2002-03. He’s good, obviously. It’s not really a shake-your-fist type of a moment, because Lucic has been highly effective for the Kings this season, and negotiations have begun to extend Lucic past this season. (Boston ultimately chose Jacob Zboril from QMJHL-St. John with the 13th overall pick.)

16. At some point, you can expect LA to divest itself of Nikolai Prokhorkin, a talented Russian forward who decided to go back overseas. He was part of the aborted Teddy Purcell trade and it would surprise no one if the Oilers doubled back. But I think there’s other NHL interest, too.

18. Spoke to Vincent Lecavalier last Friday, but he politely declined to address a question we’re all wondering: Is there any chance he changes his mind about retirement? He spoke about that when he first signed, and didn’t want to go back there. He’s reborn in Los Angeles, scoring twice in Monday’s loss to San Jose. “The way they play here is very different than the way I’ve ever played or been asked to play,” Lecavalier said. “No blowing the zone. No separating yourself. Everyone stays close for support, moving together. It’s a good fit for me.” Did you have any questions for the Kings when they were trading for you? “No, not really. I was just excited for a new opportunity. They were the ones who had questions for me. Was I on-board with what they were trying to do? I told them I was. We spoke about 10 minutes before the trade happened.” I don’t think Los Angeles could afford it if Lecavalier changed his mind, even with Philadelphia keeping half his salary.

19. Is there anyone on the Kings who is a much better player than Lecavalier realizes? “Anze Kopitar for sure. You know how good he is, but seeing him in-person, he’s even better than you think. Jake Muzzin and Alec Martinez. They are really good defencemen, but don’t get much recognition.” Does he watch the Flyers at all? “They’re always on when we play late, because (Luke Schenn) wants to see how Brayden is doing,” he laughed.

Make sure you’re reading 30 Thoughts as soon as it comes out. If you missed the link above, it’s here.