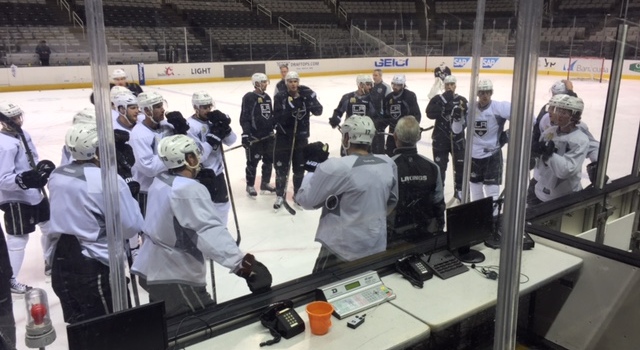 Good morning from San Jose, where it is so very cold. While it has been a bit nippy outdoors, inside the SAP Center it was downright freezing. Like, Toyota Sports Center against-the-glass freezing. This is because, as I’ve learned, due to the dual schedules belonging to the Sharks and Barracuda. On Sharks game days that immediately follow a Barracuda game day, the dehumidifiers are on and cranked up, and the result is a frigid indoor climate. Darryl Sutter even noted it during today’s media availability and followed it up by reminiscing about the power outage in the rink prior to Game 1 of the 2014 playoff series, which may have been linked to the installation of the dehumidifiers. “I was thinking, well, that wouldn’t have been good if that had been while I was walking across the ice there, it would’ve killed ya.”

Onto the lines, which showed no changes from Saturday’s game against Edmonton:

-Jonathan Quick left the ice first and is expected to start tonight against the Sharks, who will start Martin Jones. Defenseman Marc Edouard-Vlasic remains out for the home team. The Sharks are 2-5-1 without Vlasic, whom the team is counting on to be ready for the postseason. “He’s getting closer, improving every day. Again, it’s one of those things where we’ve got some time on our side here,” DeBoer said, as reported by Kevin Kurz of CSNBayArea.com. “The important thing is he’s ready to go for playoffs.”

-The Sharks held their morning skate at their practice rink today, which is the first time I can remember that happening in advance of a home game against the Kings. So, instead of a Quick Hits audio post with an opponent, I interviewed Brayden McNabb.

-The road team has won all four meetings this season, which defies the recent history of this rivalry. Entering this season, home teams had gone 26-6-1 in the previous 33 regular season games in the series.

“Yeah it’s kind of weird, because usually when you come into this arena they’re really tough to beat here, especially that first period,” Drew Doughty said. “They always just turn it on right away off the bat and kind of dominate the first period and they settle down from there. I think they’ve lost their last three at home or something like that, so we know that they’re going to try to turn that around tonight and play their best hockey here.”

San Jose, just 16-18-3 at home this season, is coming off consecutive home losses to St. Louis, Edmonton and Dallas. Why has this year’s season series bucked the trend?

“I don’t really have a reason for you. I don’t even really remember our losses at home,” Doughty said before correcting himself. “Actually, I do remember our first one – we weren’t ready to play. I think it was our first game of the year, and we kind of just gave that one to [the Sharks]. Yeah, I don’t have a reason for you, but I do think if we meet in the playoffs, it’ll be a bit of a different story, the home team will make sure not to lose those games.”

-I’ll be jumping on The Power Play on SiriusXM with Laughlin and Boomer at 2:15 p.m. After that, I’ll post today’s Darryl Sutter quotes. There’s more to come, Insiders… 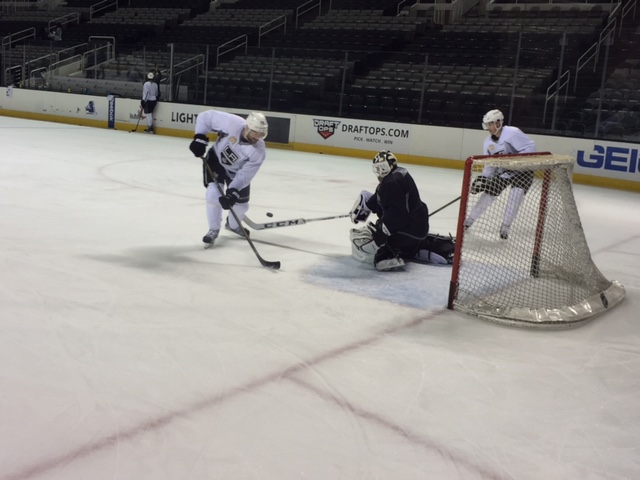