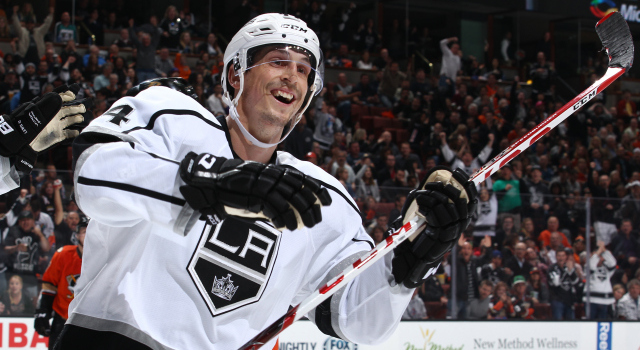 Vincent Lecavalier, who has provided valuable leadership, depth scoring and faceoff success since he was acquired in January from the Philadelphia Flyers, is this year’s Kings nominee for the Masterton Trophy, as chosen by the Los Angeles chapter of the Professional Hockey Writers Association.

The winner of the Masterton will be selected in a poll of all PWHA chapters at the end of the season. Former Kings to have won the Masterton are Dave Taylor (1991), Bob Bourne (1988) and Butch Goring (1978). Last year, Robyn Regehr was nominated for the Masterton; the year prior, Willie Mitchell received the nod. Honoring the late Bill Masterton, the former Minnesota North Star who died on January 15, 1968 as the result of an on-ice injury, the Masterton Trophy has been awarded every year since 1968.

The Trophy is often presented to players who have endured extensive injury or health rehabilitation or have been affected by major challenges in their personal lives. A list of all teams’ nominees is available here.

This year’s round of nominations received more attention than usual because of the Buffalo chapter’s decision to nominate Ryan O’Reilly, who had been arrested and charged last summer for driving while impaired by alcohol and fleeing the scene of an accident. Last year’s Masterton Trophy winner was Devan Dubnyk.

I spoke with Lecavalier earlier today about tonight’s game against San Jose.

Lecavalier, on the team’s late-season focus:
We’ve clinched the playoffs, but we haven’t clinched the division or conference, so I mean that’s a goal that we’re trying to maintain even though there’s seven games left, but you’ve got to be sharp. You’ve got to be sharp going into the playoffs and you want to be playing solid. [The Sharks] are a team that we might play in the first or second round or whatever, so they’re all important games.

Lecavalier, on facing a potential playoff opponent late in the regular season:
It’s extra motivation, especially these guys. I think I’ve only played them once here, but I mean you can see the rivalry from the past years, so you know it’s going to be a solid game, a physical game, but there’s more at stake; There’s two points, the division, the conference, there’s the potential of playing them in the playoffs, so there’s a lot of things that go into tonight’s game, we know that, so we’ve got to play the right way and play solid.