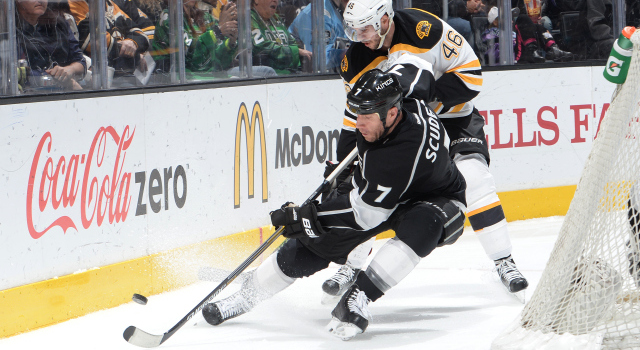 On the road trip:
Quite frankly, I think we outplayed Winnipeg and Minnesota for a majority of the time, the only time it gets ugly is when we’re down goals and we have to take chances to try to tie it up.

On whether it’s challenging to get through the last handful of games:
I mean, sometimes. Some of the guys who have been here all year, maybe they feel a little bit different, but for me, I’m still relatively new, but to be in the position I’m in from where I was is pretty exciting for me. I think sometimes actually, some of the teams who we’ve played, especially like a team like Winnipeg who’s out of it, they’re playing light, they’ve got nothing to lose, they play hard and they try to play the right way, but it’s not a whole lot of pressure, and sometimes those teams are the toughest teams to play with when there’s 10-15 games left. I think we’re doing 90-95% of things right, the last bit is just burying the puck when we have those opportunities.

On whether Edmonton is one of those loose, “dangerous” teams:
I think so, they ran the table on San Jose the other night, and like I said, they’re playing loose. They try some plays, they’re still playing hard, they’re still trying to do the right things, but there’s not that overwhelming pressure and there’s not that whole season left to go, so they’re just trying to finish up well, get some wins, and move on with their summer. I’ve been there, I’ve been for a team like that and that’s your mindset, you just want to finish strong so you can go into your summer with some type of positive heading into your offseason workout.

On how the team manages the last few games:
We want to finish as high as we can, we’d like to win the division, win the conference if that’s possible. We want to do those things, but I think at this point it’s more important about how you’re playing. You could be winning games, but if you’re winning the wrong way, you’re not doing yourself any favors if you think that’s the right way to play. We’re at the point right now in the season where we’re dotting the I’s and crossing the T’s, I think that’s more important to me than just flat-out results. We want those results, but if we play that way, we’ll get them also.

On Connor McDavid:
I actually haven’t played against him yet, but from what I’ve seen, he’s a dangerous guy. He’s good in space, he’s good in tight, he’s able to create time and space for his teammates, I think that’s what makes him so dangerous. If you give him too much room, he can make a move, he’s got a great shot, he’s an elite player and you have to treat him as such.