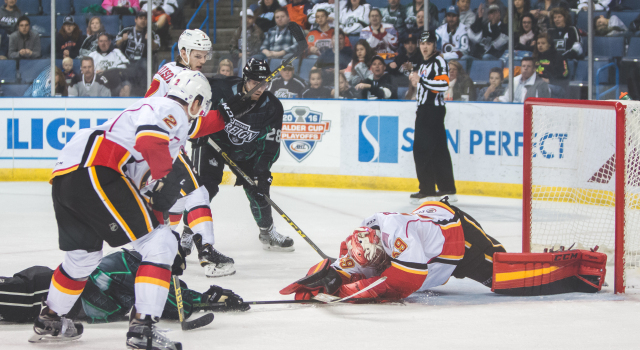 Reign head coach Mike Stothers, on the poor start and if it was the difference:
Start and finish. Wasn’t very good, so, start like that … what’d we spend the first four shifts in our … we rolled four lines through in the first start of the game but we couldn’t get out of our own end. So, yeah, I guess the start would be part of it.

Stothers, on the Heat:
They played very good. They played a good hockey game. They skated, they moved the puck. They did a lot of things and I give them a lot of credit. They suffered a setback last night, responded very well today. I’m still not sure if it was so much what they did to us or what we didn’t do to them.

Stothers, on the Lowry-Sutter-Brodzinski line, Brodzinski and the centers:
There was a shining moment, there was a group of three that I was quite happy with, extremely happy with. Jonny Brodzinski was the best player on our team. I wouldn’t say he was [the best] on the ice because they had a couple good players tonight, but for us, Jonny Brodzinski was clearly the best player on the ice and that line was very, very good. [Reporter: Ten shots on goal for Brodzinski, is he shooting enough?] Well, yeah. That’s terrific. He had 10 shots. Do you know how many shots other guys had? How many did Crescenzi have? None. How many did Kempe have in the middle when I had him in the middle? None. How many did Leitner have? None. And Newbury had one. So that’s not creating a whole lot of offense from the middle of your ice. And if Brodzinski could have 10, how can those four guys have one between the four of them? So, that’s a question you might want to ask them.

Stothers, on the failed 5-on-3 in the second period:
Well, I didn’t hurl on the bench so I guess that’s a good thing, but I wanted to. So, you asked me last night, what was the difference in the game? Special teams, yeah, we scored a couple power play goals. Tonight we didn’t. We had every opportunity to do so. And we didn’t look very good doing it either. Again, game comes down to one goal. So, you capitalize on those opportunities, which you should of because we almost had a full two minutes of 5-on-3, we didn’t. And as I mentioned, we had guys who didn’t even register a stinking shot. So, you know what, you ask me again, was Stockton that good? They were pretty good. Were we that bad? Yes.

Stothers, on the team’s play as a whole:
We need to be a lot better than we were, and we weren’t. And I don’t mind standing here telling ya and praising them when they do well. And I certainly don’t mind telling you when we were far, far the underachiever as a group.

Stothers, on what the forwards are doing wrong:
Jonnny Brodzinski found a way to put 10 pucks on the net. Four guys combined put one puck on the net. So, obviously they’re not creating, they’re not shooting, they’re not doing anything. And when you’ve got that production from the middle, your center ice men, then you get the results that you get. Haven’t scored in 20-some-plus games. So, I guess we’re just waiting for Dowd to come back. Here’s your opportunity, make something happen with it. And don’t sit there and look at the scoreboard at the end of the night and have your shoulders slumped and your head down because we didn’t win the game. What did you do? What did you bring? Jonny Brodzinski brought 10 shots and played an unbelievably good game and scored too, didn’t he? Funny how that works.

Stothers, on the failed power plays:
We didn’t even execute. We didn’t even handle the puck clean. We ended up doing a bag skate. We did more down and backs, we couldn’t get get into the zone 5-on-3 with possession. So, we weren’t very sharp.

Stothers, on going on the road with just one home game left:
Well, we’ve been pretty good about rebounding and responding to efforts that are not acceptable. With this group I anticipate us to be much better. … We’re going on the road and sometimes you vent a little bit, step back, reevaluate and go, time to get back to work.

Stothers, on the playoffs:
I don’t even want to talk about it, don’t even go there with that. I’ve said it before. We’re not backing into anything. You’re going to make the playoffs, you better damn well earn it. And that’s with winning.