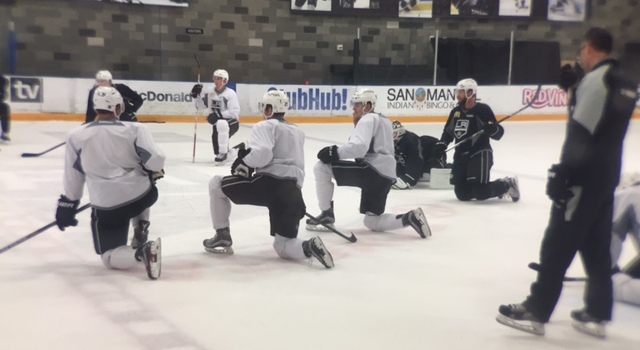 Good morning, Insiders. The Kings skated this morning at Toyota Sports Center and aligned as such:

-Stick tap to Alex Kinkopf for the photos and a few notes from TSC on a day I did not make it down to the morning skate.

-Vincent Lecavalier skated with the group and remained on for extra work as he attempts to work his way back from an undisclosed ailment that isn’t expected to be serious but kept him out of Thursday’s game against Winnipeg. For those who missed the earlier report, the word from the team was that Lecavalier is “a little banged up.” Remaining on for extra work with Lecavalier was Jhonas Enroth, Jamie McBain and Nick Shore; Shore’s presence was likely just to get some extra work in and probably isn’t an indication that he’d be out of tonight’s lineup. As always, “wait for the song” for the 20 who will face the Edmonton Oilers tonight (7:00 p.m. / FOX Sports West / KABC 790 AM / I Heart Radio).

-Kris Versteeg didn’t skate with the main group but did take the ice with the extras, which is a good sign that he’s in the process of taking a step forward in recovering from the foot injury sustained when he blocked Dennis Seidenberg’s shot in the win over Boston last Saturday. Quell alarum.

-Jonathan Quick left the ice first and will be expected to start against Edmonton in the teams’ fifth and final meeting this season. Los Angeles has won the previous four games by scores of 3-2, 4-3, 5-2 and 2-1. If you notice a trend, three of those four games were decided by one goal. The Oilers won 6-3 in San Jose on Thursday. Expect a close, tightly contested game. Story to come.

-This was from this past Sunday, and it is hilarious:

I don't want to add any pressure to the situation, but if the Oilers lose this game they are mathematically eliminated from the playoffs.

Yes, the Oilers were mathematically eliminated. Via radio play by play broadcaster Jack Michaels, who like Nick Nickson went to Ithaca College, Laurent Brossoit will draw his sixth career start. The 6-foot-3, 202-pound goalie was taken by Calgary in the sixth round in 2011 and traded to Edmonton as a part of the Ladislav Smid trade in November, 2013. He’s 0-4-1 with a .907 save percentage and a 2.99 goals-against average in his previous five appearances. Pay little mind to those numbers, as there’s no real sample size and those numbers are depressed by playing for a team that has not operated with an airtight defensive structure. Via EdmontonOilers.com, Ryan Nugent-Hopkins (concussion), Benoit Pouliot (shoulder), Oscar Klefbom (lower body), Brandon Davidson (lower body), Adam Pardy (hand), Andrew Ference (hip) and Eric Gryba (knee) are not expected to play. 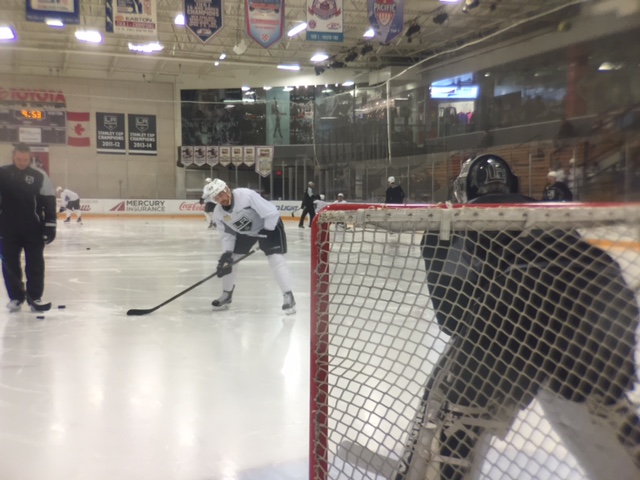