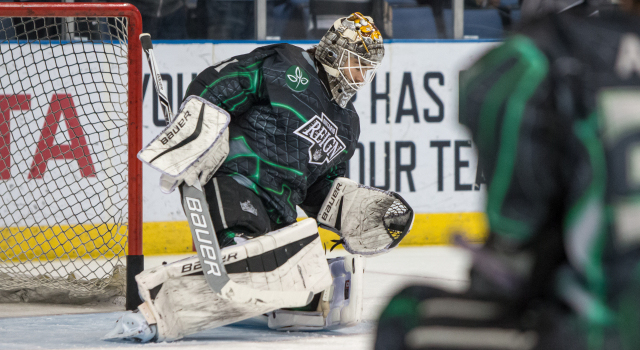 Jonny Brodzinski, on his success as of late:
I think today was just the linemates. Lowry and Suttsy both had great games. You saw in the first couple periods where it was just chance after chance for our line and it’s everybody on the line getting chances, too. Not just me.

Brodzinski, on his 10 shots and if the coaching staff urges him to shoot:
Stuttsy does get on me about shooting the puck. I think it’s just the little things with me, too. I try to get on myself as much as I can about just shooting the puck a little bit more, and good things happen when you shoot the puck. These last couple games, you score goals when you shoot it, so might as well put it on net.

Brodzinski, on not being able to clinch a playoff spot tonight:
Yeah, it’s obviously something that was in the back of our minds coming into this game, but you’ve just got to bring it to the next game now and try to get it then. … You’ve just got to take it game by game now, but obviously that’s our main focus, just clinching that spot.

Brodzinski, on Poulin’s play:
I had about three breakaways on him and he saved every one of them, so, he played a really good game, that’s for sure.

Michael Mersch, on poor starts being the team’s Achilles heel:
Yeah, no kidding. Pretty frustrating. I think we’ll all kind of have to sit down as a team and talk about it. Personally, I haven’t talked about this with anybody, maybe starts in practice. Start in the beginning of practice, have a good practice. Have a good beginning of practice. Do what you’ve got to do before, maybe if you’ve got to get there a little earlier. Warm up differently or something before just so we’re ready in practice and hopefully it will carry over to games because a lot of things you do in practice carry over to the games. [Reporter: Have the beginnings of practices seemed off?] I don’t think so, I think focusing more on it. I don’t think practices haven’t been different … than all year, but maybe if we focus on it a little bit more, everybody dials in, just a little bit more. Guys are … it’s pro hockey, everybody’s getting ready, but if we do it a little more maybe that will help us have a better start.

Mersch, on not having Nic Dowd:
He’s a great player. Ultimate goal is to get up to the NHL. We just keep carrying on, he’s a great player but we’ve got a boatload of centermen here and they’re all good players as well. Just gives the opportunity for people to step up.

Mersch, on the rise of Jonny Brodzinski and how it compares to him last year:
It’s funny that you say that. Usually need a rookie to come down the stretch and score some big goals for you, get hot, and carry it into the playoffs. You see that with a lot of teams. There’s that person that kind of picks it up and makes a difference in playoffs. So hopefully he can keep going here. He’s looked tremendous out there. Parallel it to me last year? I wasn’t able to watch me last year, I was playing. But it’s good to see. It’s fun to watch someone’s development, see them maybe struggle in the beginning, keep working hard, stay persistent and be able to overcome that. He didn’t score a goal for a while in the beginning of the year and now he’s lighting it up. Just credit to everybody. The development staff, the coaches down here who they just keep working and keep working and stick with a player and now he’s having success.

Peter Budaj, on the Heat’s start:
They came out really hard. Credit to their team and we didn’t come out as hard. As the game progresses we took it to them, especially at the end of the first period. Second and third I think we played much, much better but we’ve got to have good starts. We know what we’ve got to do. I know it’s back-to-back nights, especially on those nights, you play back-to-back nights in less than 24 hours you’ve got to have a strong start and that’s what their team did. Credit to them, they played really hard. But after those two goals their goalie played well and made some big saves for them and we couldn’t get another one by him to take it to the overtime.

Budaj, on Sieloff’s goal:
Sometimes players are going to make a good shot. I’m 6-foot-1 almost, but sometimes there’s holes there. The player hits the bar and in and makes a good shot.