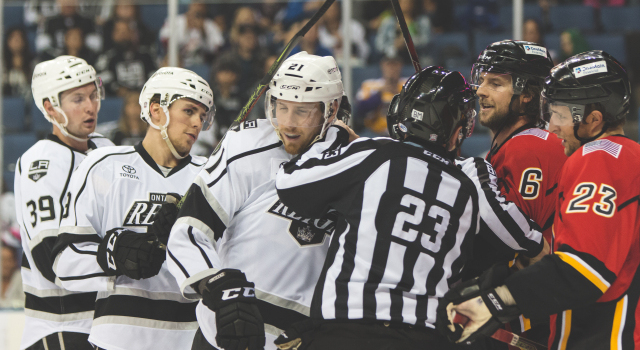 Reign game breakdown
The Reign wanted to treat this two-game homestand against Stockton as a playoff series. With that in mind, the Game 1 storyline was special teams in a 4-2 Ontario victory on Friday night. The Reign finished 2-for-5 on the power play and a perfect 4-for-4 on the penalty kill, including a 5-on-3 for 1:33 in the first period, dominating the special teams battle. The win put the Reign (39-15-4-1, .703 win %) one point away from clinching a playoff berth with the chance to do so Saturday night against the Heat (27-27-2-2, .500). Jonny Brodzinski’s power play tally at 13:26 of the first period put the Reign up 1-0 and the game was 1-1 after the first intermission following a defensive breakdown by Ryan Horvat resulting in a Turner Elson goal. The Reign forged ahead in a pivotal second period on goals by Justin Auger and Sean Backman, who, both along with Brodzinski, now have goals in back-to-back games. After surrendering a in the final period to Brett Kulak just 1:08 in, the Reign’s power play came through again. Defenseman Jeff Schultz let go of a slap shot from the point for an insurance tally that put the Reign up 4-2 and provided some breathing room to close out the game. Goalie Peter Budaj, starting in his 14th straight game, stopped 26 shots for his 37th victory. His best save of the evening came against Derek Grant as he surprised the Heat’s leading goal scorer on a bid at goal line with his paddle on the 5-on-3.

Best quote
Brodzinski, on the team having a chance to clinch a playoff berth on Saturday: “Yeah, that’s something that we’ve looked forward to the entire year. So, it’s going to be nice to have that star next to our name.”

Three stars
–Sean Backman – Make room at the top for Backman. The team’s leading point producer (53) has caught Michael Mersch for the Reign goals lead with 21. Backman’s perfect one-time finish of a cross-ice feed from Kris Newbury on a rush gave the Reign a 3-1 lead at 11:55 of the second period. This has been the Yale grad’s best pro season and he has more points in fewer games this time around with nine games to go (53 points in 59 games this season; 44 points in 76 games in 2014-15).
–Jonny Brodzinski – The rookie is “turning the corner,” and “is a threat,” as graded by head coach Mike Stothers. His power play goal to open the scoring was a superb individual effort where he jammed his own rebound past Heat goalie Kevin Poulin. The winger, who now has five points in his last four games, led all players on the ice with 7 shots on goal.
–Jeff Schultz – The stay-at-home, 30-year-old defenseman smiled when talking about his goal, just his third of the season. “It was a good feeling,” he said. “I know I don’t score too many goals so I’ll take them when I can.” Schultz, as he has been the entire year, is a heavy penalty killer and played a crucial role in the team killing the early 5-on-3.

Turning point
The Reign had a quick start to the second period with Auger’s 16th of the season squeaking by Poulin on a shot from the left circle. Auger’s first bid was blocked, but he flung the puck right back toward the Heat net and was rewarded with traffic in front by Adrian Kempe. After that, the Reign led the rest of the way.

Stat fact
–1 – Only one AHL team has clinched a playoff spot, the Toronto Marlies. If the Reign can get one point on Saturday against Stockton, they’ll be No. 2 and the first in the West to secure a berth.

This and that off-ice
Kings head coach Darryl Sutter came to watch his son, Brett, play for the Reign. During postgame interviews Sutter exited the Reign’s locker room and gave Backman a pat as he was engaging with reporters. … Carrlyn Bathe, she of Kings in-game entertainment fame, was in attendance to watch her brother Landon Bathe, who was one of the two linesmen. … Forward Jordan Samuels-Thomas (lower body) did not practice this week and missed his second consecutive game. … Center Nic Dowd remains on his call-up with the Kings.

Next up
The Reign and Heat meet again at 6 p.m. Saturday, with a chance for the first-place Reign to officially clinch a playoff spot with a victory or overtime/shootout loss. It will also be Ontario’s second-to-last home game of the regular season. 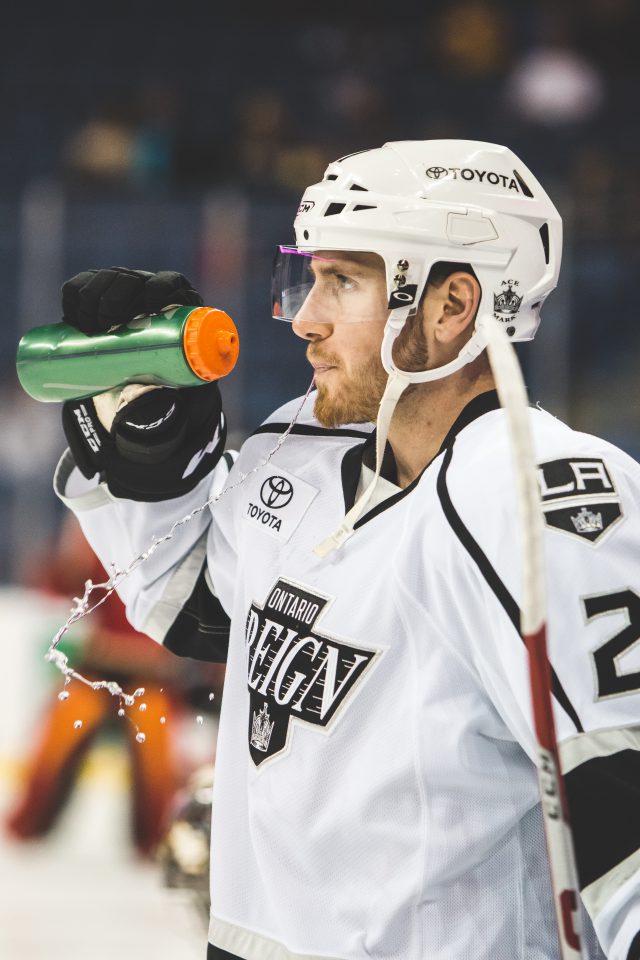