Reign getting what they need from Forbort 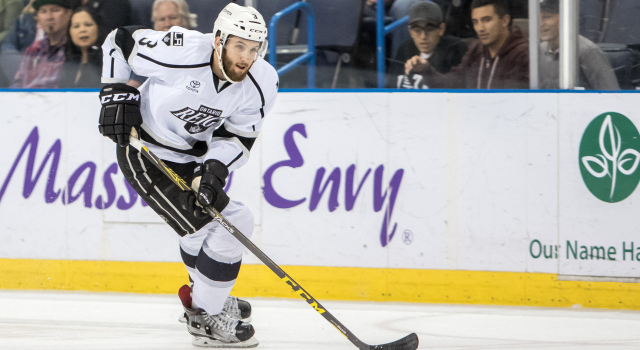 A Kings slogan used to read as such: “Tough to play against.”

That’s all Derek Forbort wants to be. And since being sent down to Ontario by the Kings after the acquisition of blueliner Luke Schenn in January, he’s provided the Reign just that in his 30 games played.

“I’m sure it’s been a bit of an adjustment for Forby. He started the year in LA. Then when you first get sent down, no matter what they say, you always think that you’re going to get recalled right away. You always think it’s a temporary thing,” head coach Mike Stothers said.

“It’s panned out that it’s gone on longer and they’ve made some changes personnel-wise. I don’t think it’s a reflection on Forby so much as they were looking for experience.”

“So, in the meantime he’s just got to bide his time down here and continue to work on the things they’ve told him he needs to work on and be a good leader down here for us, which he has been. Be a good, reliable, steady defender for us, which I think he has been. The other stuff, he can’t control. What he can control is his attitude and his work ethic and how he’s playing here. I think he’s done a great job. We count on him. We rely on him a lot.”

Forbort, who recently turned 24 on March 4, is being relied upon even more so now with captain Vincent LoVerde out of the lineup due to a neck/throat injury.

“It doesn’t really change my approach to how I play, obviously we’re going to miss a little offense with Vinny out but I’m not really the guy who’s going to step in and fill that void even though I got one the other night,” said Forbort, whose first goal of the year got lost in a disappointing 4-1 defeat to San Diego last Saturday. “Just playing solid and being hard to play against and making good plays coming out of my zone is my goal every night. I’m just trying to do the same job with Vinny out and (Zach Leslie) has done a good job coming in.”

The defense-first Forbort has 1 goal, 5 assists and a plus-8 rating, but the number that matters most for the back end is their No. 1 ranking in goals against allowed (117 GA in 58 GP, 2.02). Sure, that number is boosted by the MVP-caliber play of Peter Budaj, but the defensive group has a lot to do with keeping the shots against down, which is also No. 1 in the AHL with a 24.67 average per game.

Forbort has played most of the season alongside fellow top prospect Kevin Gravel, but with LoVerde out his pairing is now with Nick Ebert. In this case though, it doesn’t matter who he’s working with, he’s still focusing on making the right plays that will get him too the next level.

“Sometimes things get a little out of hand with trying to make too cute a play, which I’m trying to stop doing,” said Forbort, the Kings’ first-round pick at No. 15 in the 2010 draft. “I don’t know, you’ve just go to stay confident with it and keep going at it.”

A lot of his game that he’s fine-tuning is addressed through video with assistant coach Chris Hajt, who runs the defense. Forbort said the critiques of his game is filtered through Hajt, rather than coming straight from the top: “I think that more comes from the coaches here just talking with Hajter and doing video with Hajter. Just what you need to work on to get up to that level so that’s what I’m trying to do.”

Forbort, on the gears changing from regular season to playoffs:
I think if you ask Stutts, the mentality doesn’t change at all from a regular season game to a playoff game. Obviously you look forward to the playoffs and it’s exciting to be in those series and play in those meaningful games.