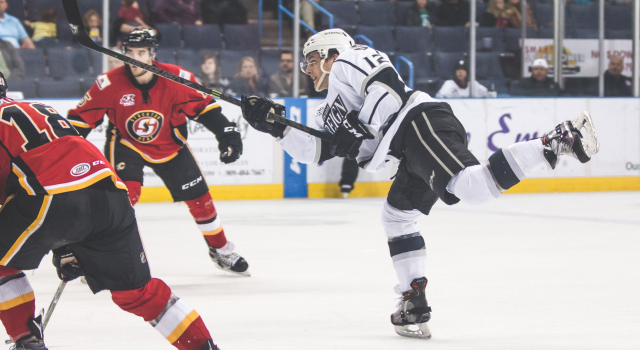 Reign head coach Mike Stothers, on special teams and which was better:
You’ve got to give it to the power play. You’ve got to score to win a game so they came through with a couple of big goals for us. I don’t know what was going on there early. It seemed like there was a lot of penalties early in the game, both ways. My feeling is just let the teams play. Let the teams dictate it unless it starts getting out of control, which I didn’t think it was. I mean, I guess they call them as they see them. I probably should be careful because there’s a good chance they might be here again tomorrow. Same guys. I just didn’t think it was necessary to be having special teams be that much of a factor, that quickly into a hockey game.

Stothers, on the power play and Schultz’s goal:
You’ve got to capitalize on your opportunities and we did so tonight. So, I think that’s a credit to our guys on the power play and it was nice to see Schultzy let a bomb go from the point that eluded everybody and found a way to the back of the net.

Stothers, on Kings coach Darryl Sutter visiting to watch son Brett play:
Darryl stopped in after the game, said hello. He had some quick time here with Brett, which I think is important for him. I know his wife and [Brett’s brother] Chris have been here for a couple of games. It’s good for Brett and it’s good for Darryl. It’s all about families. So, he’s a busy man so he’s got some work to do. They have a big game tomorrow but he did stop, say hello and it’s always nice to see him.

Stothers, on the chance to clinch a playoff spot on Saturday:
Listen, nothing changes. We came in tonight with 10 games left and that’s 10 victories. Tomorrow, we’ve got nine games left so that’s nine victories. I expect us to win every game. And that’s not going to change no matter what. At some point if we’re fortunate enough to clinch and there’s still some remaining games then I expect us to win those games. I do not want this team to back into any situation. You go in there winning. So we’re going to have to get ready. They’re going to be better and we’re going to have to be ready for the challenge.

Stothers, on the Reign’s defense taking on the Heat:
They shoot a lot. They put a lot of pucks at the net. That’s part of their team game plan. But, there were some good chances that we were, again, still not quite as sharp as I’d like to see us be defensively. And then probably their coach is in there saying the same thing. I thought we had some real good opportunities on their goalie, too. Hopefully going forward and getting ready for the remaining games we can tighten that up a little bit. We’ll address a few things tomorrow, get ready for tomorrow’s rematch against these guys. It’s a team [that] they get their D involved in the play, you get four-man rushes, you get a lot of odd-man rushes and they’re not afraid to throw the puck to the net from anywhere.

Stothers, on if it’s coming to crunch time and if the team is looking ahead:
No, because then you’re looking too far ahead, you’re not paying attention to what’s right in front of ya and that’s tomorrow, game at 6 o’clock. You can’t do that to yourself, you can’t do that to your opponent either. You just stay focused, take it one day at a time. We’ve talked about this as a group. We win, great, we lose, we need to be better. There’s no getting too caught up in the emotion of the games or the situations that you’re in. We’ll just win tomorrow and get back to work.

Stothers, on Paul Bissonnette’s injury and timeline to return:
He’s still here. And he’s around the rink a lot. Haven’t seen him on the ice in quite some time. He did make a lot of the video today which he was quite excited about. Might have been the last time he played was the last time we played Stockton and it’s kind of good to have Biss around. He keeps the mood light for all of us, the players, the coaching staff. And there was actually some real positive video from the archives the last time he played. I don’t know when he’s coming back, but it’s just good to have him around. It really is. Keeps the mood light, keeps the guys loose, maybe when I start to get them wound up, a little tight. He finds a way to keep everybody loose so that’s a good thing, good guy.

Stothers, on Newbury’s game and other centermen:
Well, he got a heck of an assist. Had zero shots. So, I mean, for the conversations we had about, it’s been a long time, or we need him to find the back of the net, in order to do so you actually need to put a puck towards the net. So, I’m happy with Newbs. He’s a great individual, he’s a great team guy, but if you’re looking it at from a standpoint of Dowder [potentially having an] extended period of time up top or even going forward. … Your strength is usually down the middle. You need some stuff created from the middle of the ice. There’s a lot of onus on him, there’s a lot of onus on Cres, Brett and Leits. Bronco, meaning Horvat, is in the middle, there’s onus on him, too. There’s a lot of responsibility on being a centerman. There’s a lot of work and a lot of jobs to do. But, I thought that line was pretty good for us tonight, Mersch and Newbs and Backs. So, maybe tomorrow. I think if he can just find the back of the net, it’s almost like Brodz at the early stages of the year. Find an ugly way to find one go off your shinpad or your backside. If it goes in, I think it’s just going to open the floodgates for him, sure it will make a world of difference for him.

Stothers, on Brodzinski’s progression:
I think he’s turning the corner. He’s a threat. When you see him out there, today probably wasn’t the nicest goal he’s got but it found a way to go in. That’s what a goal scorer does. I think he’s playing with some confidence. He knows he’s being counted on and relied upon. But he put in the time. He’s a reliable guy. It’s not just we’re throwing him out there and saying you have to score. This guy’s playing away from the puck, he’s playing in the defensive zone. Got a little PK time here tonight, which is great for him. So, yeah, he’s getting it and that’s all you can ask for as a coach.

Sean Backman, on his 21st goal of the season off pass from Newbury:
They all feel good, even that empty-netter I had the other night [against Bakersfield]. Whenever the puck goes across the goal line I’m happy. That was a great play by Newbs there to set me up for the one-timer, I’m just happy it went in.

Backman, on if it’s feeling like crunch time:
Yeah, we want two points every time we go to play. … I guess we’ve got to get the one point first to clinch and then take care of business for home ice and stuff like that.

Backman, on the power play:
It’s huge because tonight was a special teams battle and we won that battle tonight. … Two for five, usually if you go 2-for-5 you’re going to win a lot of hockey games. That was a big difference tonight. [Reporter: Anything different going on with the power play tonight?] I don’t think so. Our focus is to get pucks toward the net and get traffic in front of their goaltender and we have to do a better job of that and I think we’re working on that and we’ll get better as the regular season comes to a close here.

Jeff Schultz, on the 5-on-3 kill in the first period:
I think it was huge. It took away some momentum from them and then for us to go out and turn it around and get a goal, kind of put the momentum on our side.

Schultz, on his goal:
It was a power play and we did a good job of entering the zone. I think it was Kempe that made a good pass over to Les and then Les kind of passed it back and I kind of have to get my ice and get a quick shot in, [it] had eyes and went in. It was a good feeling. I know I don’t score too many goals so I’ll take them when I can.

Schultz, on if it’s crunch time:
I think so, yeah. We’ve got 10 games left, or nine after tonight. So, each game is just as important to get ramped up toward the postseason, but you can’t look too far ahead because things can change at any time.

Brodzinski, on if it’s feeling like crunch time:
Yeah, we talked about it too in video this morning about how these games, we’re going to take to them as if they’re playoff games. Depending on if we have the first two games at home or away, we came to this one as two home games. We’re taking it as a playoff series.

Brodzinski, on a chance to clinch Saturday:
Yeah, that’s something that we’ve looked forward to the entire year. So, it’s going to be nice to have that star next to our name.

Kris Newbury, on setting up Backman’s goal:
It was kind of a broken play to start. The D kind of just fell down and it looked like me and Backs were almost going to fight over it for a bit and I eventually got it and I just decided to pass and he made a great shot. That was a big goal for us. We need some more of that and hopefully come out tomorrow and do the same thing.

Newbury, on the power play and penalty kill:
During the season you always want to see your special teams at the top of the league but with 10 games left, 9 games left now, you want to go into playoffs on a high. We want our special teams to be at the best they can possibly be heading into the playoffs and as of right now we’re doing a pretty good job so we’ve got to just keep building each game.

Newbury, on his confidence:
I felt like I played a little bit better tonight. Obviously got to get more shots on net. I don’t think I registered a shot tonight. Just being in better positions in the defensive zone will obviously benefit helping with turnovers and creating offense the other way. Each and every game is getting a little bit better but still more confidence to be had, for sure.

Newbury, on the chance to clinch a playoff spot Saturday:
It’s been a good year. We want to win the last nine games. Obviously tomorrow’s a big game, we want to sweep these guys, get ’em out of here not feeling good. We want to build each and every game going into the playoffs and we want to finish 9-0, 10-0 here.