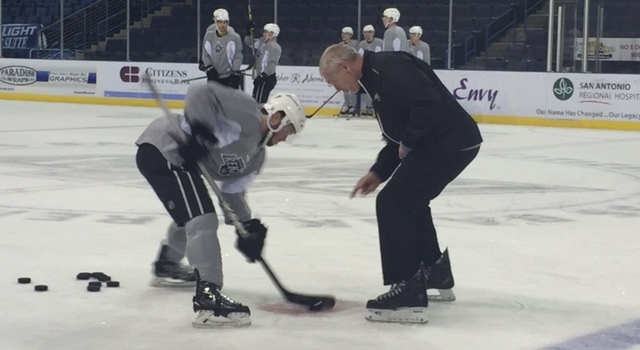 Some hits from today’s 10 a.m. morning skate at Citizens Business Bank Arena in Ontario as the Reign host Stockton at 7 p.m.

–Goalie Peter Budaj was first off the ice and is expected to make his 14th straight start.

–Ryan Horvat, who wore a red no-contact jersey on Wednesday, shed that color and will play tonight. As a result, a debut for winger Matt Schmalz will have to wait. With Nic Dowd with the Kings, Kevin Raine will move up to offense again as he did Tuesday vs. Bakersfield. Vincent LoVerde (neck/throat) will remain out as will Jordan Samuels-Thomas (lower body) and Paul Bissonnette (mid range). None of those three players took the ice for morning skate nor at any practice the last three days.

–With Dowd out of the lineup and due to various injuries (said above) the Reign will have yet another different look tonight, and that also consists a first line to start of Michael Mersch-Kris Newbury-Sean Backman. The thought is head coach Mike Stothers would like to get Newbury moving, despite the success of the Mersch-Brett Sutter-Jonny Brodzinski line just earlier this week in a 5-2 win in Bakersfield. “With Dowder out, it kind of changes things, a lot,” Stothers said. “I really liked the line of Mersch, Sutter and Brodzinzski in Bakersfield, so having said that, why not break ’em up? … Put Mersch and Newbs and Backs, it’s the hope of getting Newbs on track. He’s been having a hard time with point production. So, maybe Mersch on the left and Backs on the right, maybe it helps Newbs. How that effects Sutter and Brodz, I don’t know. We need to get some kind of offense and some kind of production from Newbs, certainly in Dowder’s absence. So that’s the thinking behind it and hopefully it’s going to work.”

Stothers went on to stress the need for the veteran Newbury and other forwards in the lineup to contribute during a crucial weekend. “I’d like to see Newbs have more than one goal in 24 games, I’d like to see (Andrew Crescenzi) have more than 2 goals in 24 games, I’d like to see (Adrian) Kempe have more 2 goals in 23 games. So, there’s a good place to start. They’ve got to be better. They’ve got to produce. That’s your job, everybody’s got a role on a team. If Cres wants to be a fourth-line centerman on a team, that’s not bad. But, he’s not a fourth-line centerman, he doesn’t want to be a fourth-line centerman. … We didn’t acquire Newbs to be a checking centerman, so bring something. And Kempe, he needs to be a heck of a lot better than he has been. He’s not been all that productive since he left and came back from World Juniors. So, my expectation for him is to be the best player on the ice, for both teams, every game.”

–The other aspect for tonight and the weekend series, is the importance of the Reign winning at home (just three home games left this season) and the opportunity to clinch a playoff spot by winning both Friday and Saturday. “It’s a huge game for us,” Kempe said. “We only have three home games left. These two games are going to be really important for us to prepare for the playoffs. If we get two home games in a row we’ve got to play like a playoff game. We’ve got to prepare for tonight and act like this is a playoff right now. Really important games here.”

“The home games, they’re non-existent really,” Stothers said. “We’ve only got one in the month of April and we’re almost into April now. It’s important to win those home ones. We’ve been pretty good at home. We’re been pretty good on the road. I don’t know if it really matters where we play, but I think we just said we were pretty good at home, I’d like us to be better at home. To me, they’re huge games and we’re going to approach it as such. We’re going to approach it as it’s a playoff, two-game homestand. Win your games at home.” Stothers has mostly shied away from using the “P” word in recent weeks, but that changes a bit as he tries to get the team going in the right direction for a full game. “I don’t like to talk about things until it’s official. I think you do a disservice if you start looking too far ahead or you assume. But, when you keep playing opponents, you try to find little tickles or little carrots you can dangle at the guys to kind of stress the importance of — this isn’t just another weekend,” he said. “Sometimes you’ve got to go down that path that you really don’t want to go down and say what’s at stake, but if we’re serious about first of all, making it and having any kind of success, we need to be playing better now than we have been. I think our record of late is very deceptive of how we’ve played. We’ve gotten some points, but have we played a full 60 minutes? I don’t think so. I think we need to be better. You do whatever you can as a coach to try to get the message across that we need to be better.”

Kempe, on what he is working on:
I have to work on everything and I know I haven’t played good enough lately and I just try to get better every day and stay on for a little bit longer (at practice) and do some things. Probably have to focus more and just play better in the O-zone. I know I haven’t played good enough the last — been for a while now — I just have to be better. Bounce back now hopefully tonight and have a good game.

Kempe, on how he stays positive during the process:
Sometimes you get tough times and you don’t play very well so you’ve just got to try to move forward for the next game and practice and try to work some extra things to be better every day. That’s what I’m trying to do before every game now.

Stothers, on wanting more from Kempe:
He is, almost ghost-like. YOu don’t see him and then all of a sudden he appears. Unfortunately, we don’t see him enough. This isn’t just to pick on a young player, but when you’re as talented as Kempe is, when you see what he does every single day in practice, but then it doesn’t appear on a regular basis during games, that just goes to show you there’s still a lot of work to do with this individual. He’s got to be harder to play against, he’s got to be harder on the puck. When he has it, he’s got to protect it, make some plays, and keep it. Not give it up, he can’t just base his whole success or the thoughts of playing in the NHL as guy that appears every once in a while and makes a good play. It’s not going to happen. You’re not going to play in the NHL on a regular basis doing that so he needs to be a lot better. … There’s a lot of expectations, so if you’re the so-called top prospect, and you’re only playing one way or you’re only playing occasionally or sporadically, it won’t be long before you’re not the number one prospect.

Stothers, on the push to clinch a playoff spot:
If you’re going to make the playoffs, then go in winning. Don’t go in because someone else lost. Go in and truly deserve it.