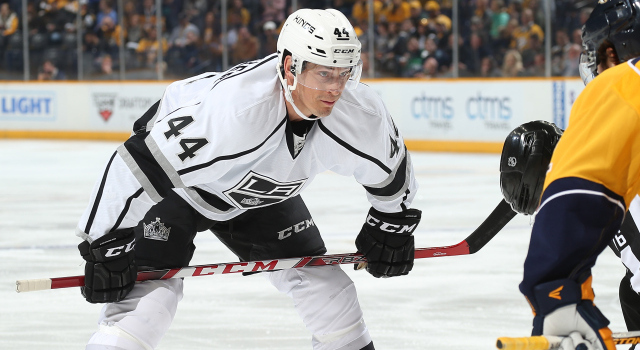 A quick practice note from Friday afternoon in El Segundo:

The hope was that Kris Versteeg would be able to take the ice and test his injured foot on Friday, as Lisa Dillman reported after last night’s game, but when pucks were strewn on the ice this afternoon in El Segundo, the only player to emerge in gear from the dressing room was Vincent Lecavalier, who was “a little banged up,” according to hockey operations, and did not play in Thursday night’s 4-1 loss to the Winnipeg Jets.

Lecavalier, whose injury is not severe, skated by himself at Toyota Sports Center.

While Dillman had reported that Versteeg’s was unable to join the team on the road trip because his foot “was still too sore to put on the skate boot,” it appears as though he has since been able to get his foot in a boot.

“He’s had his skates on, yeah,” Darryl Sutter answered when asked whether Versteeg had skated since suffering a left foot injury when he blocked a Dennis Seidenberg shot last Saturday.

Sutter’s answer to whether Versteeg continues to follow a day-by-day process of receiving treatment followed by evaluation was also fairly ambiguous, as is natural during a time of the year when injury information and availability is not easily surrendered.

“He puts a skate on and goes for a skate. When he’s ready, he’s ready,” Sutter said.

The remainder of the team took part in off-ice workouts and meetings. The Kings face the Edmonton Oilers at Staples Center at 7:00 p.m. Saturday evening.