How are minutes assigned at this time of the year? 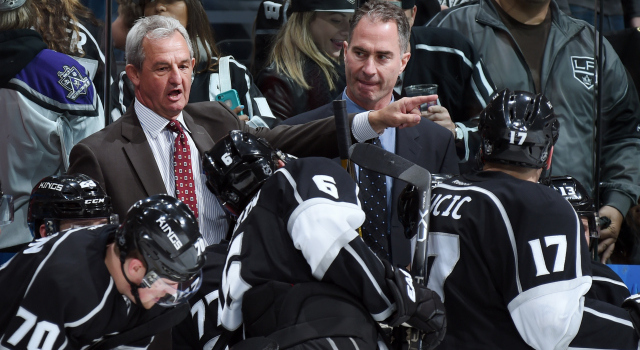 In Thursday night’s game against Winnipeg, minutes were assigned fairly evenly amongst the forwards, with even strength time on ice ranging from Nic Dowd’s 10:12 to Anze Kopitar’s 15:00. Lines were cycled, and only special teams time served to accentuate the fizzled discrepancy between the haves and have-nots.

Darryl Sutter may be more inclined to rotate lines evenly than most NHL coaches, and this may be stressed to a greater degree during a late-season portion of the schedule when the team has already clinched a playoff spot and is looking to reduce the load on some while striving to get everyone’s games in order. He articulated that balance during today’s media availability.

Darryl Sutter, on assigning minutes with injuries and the team in a playoff spot:
I’ve coached a lot of teams and a lot of games, and usually in a playoff spot, teams and the way the game’s changed a little bit in the last three or four years where oncethe deadline comes around, there are a lot of players that are coming up that are getting the opportunity to see if they can play on the big team next year. They’re actually tougher games than games in October, so the way I look at it really clearly is when you have a good team, and what were we, the second team to clinch early? It probably would be the fastest ever for this team, my mindset would be I want to keep the top guys sharp and playing their minutes, for sure. The minutes will not change or go down. They have to stay sharp, and what’s the risk in that? The risk is the obvious, but that’s the risk every game. So you’re trying to win every game, but at the same time you’re also, two or three things, with the injuries and with some guys that haven’t played very much, we’ll let them dictate. They might get a little bit more reign, but we’ll let them dictate to see if they can actually help us once playoffs do start. We’re going to find out in the next seven or eight games if guys that are playing in your third pair or moving around on the power play or guys that are getting a game in here or an extra few shifts against a good player to see how it’s going to hold up. I think I learned some of that on this trip already.