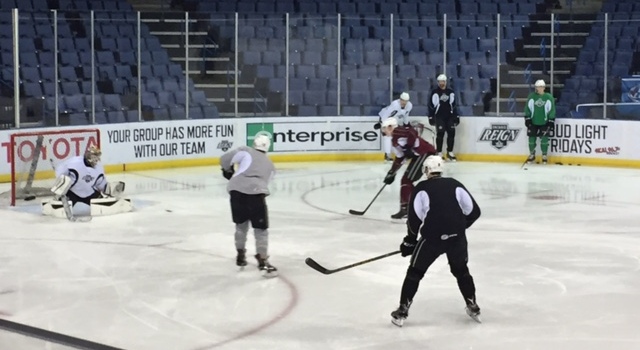 Some notes from today’s full practice at Citizens Business Bank Arena as the Reign prep for a back-to-back at home starting Friday against Stockton.

–All players were on the ice with the exception of those already known to be out: Vincent LoVerde (neck/throat), Jordan Samuels-Thomas (lower body) and Paul Bissonnette (mid range). Ryan Horvat was wearing red but participated until the end. His ailment is considered “pain tolerable,” by head coach Mike Stothers. “He made is through all of practice today so I’m hoping that another 24 hours he should be good to go,” Stothers said.

–Don’t expect anyone different to be wearing the captain’s “C” while LoVerde is out of the lineup. “Vinny’s our captain and he’ll be back soon so there’s no sense in putting a ‘C’ on anybody,” Stothers said. “We know we’ve got a good group of guys that are part of our leadership group anyway.” Sean Backman and Nic Dowd have served as alternates all season, but with LoVerde out and Dowd up with the Kings, Michael Mersch and Jeff Schultz each wore an ‘A’ on Tuesday vs. Bakersfield and that will continue for now. But still, having the ‘A’ was a bit of a surprise for Mersch. “I got there and someone told me in the locker room I hadn’t really looked at my jersey and it was on there. … I didn’t wear a letter in college at all so to have it on my sweater was pretty special and it means a lot that the team thinks of me that way,” he said.

–Mersch offered up what his advice was for Dowd before his call-up to the Kings: “I just warned him that [Kings coach] Darryl [Sutter] likes to start the practices a little early there, so make sure he’s on the ice on time.” Dowd, who played over 12 minutes and led the Kings in the faceoff circle in his NHL debut against the Wild on Tuesday, is expected to center Tanner Pearson and Tyler Toffoli tonight against Winnipeg, via LA Kings Insider Jon Rosen. Stothers actually shared a funny quote about Dowd’s potential return to the Reign and why Stothers’ own experiences keeps him lip-locked when it comes to asking when his top-line center may be back: “I don’t ask because when a guy gets an opportunity to be up, let them be up as long as possible. We used to hope they’d forget about us when we got recalled to the Flyers because it just meant extra days of NHL pay. So, if you can avoid management before they can send you back down to Hershey, we did it. You’ve got to do what you can, right?”

–Jonny Brodzinski’s younger brother Michael, a defenseman, has made the decision to forgo his senior season at the University of Minnesota and go pro, which will land him in San Jose with Pacific Division foe Barracuda.

Brodzinski was the highest scoring dman for the #gophers. Entry-level contract starts next year, ATO this year #sjsharks

The Reign’s Brodzinski, 22, went through the same process in leaving St. Cloud State to join the AHL team in Manchester a season ago. “I’ve been kind of talking to him through this whole process because I went through a very similar thing at the end of the year last year,” Brodzinski said. “He’s kind of asked me for some tips and stuff like that of how to talk to guys about his decision and what he wanted to do. Kind of let him make his own decision but at the end of the day I think he wanted to leave school, he wanted to get on with his pro career.” Michael, 20, could meet his brother in an AHL game as early as next week in San Jose. “Next Wednesday’s coming up so it’s pretty crazy,” Brodzinski said. “I played against him in college probably eight times so it’s nothing different than that, just at the next level.” So who has the edge? “I’d like to think that I do as of now, but you never know. He’s a tough player to play against,” Brodzinski said.”

–Peter Budaj was on the ice early to work 1-on-1 drills with goalie coach Dusty Imoo.

–Most of the hour-long practice consisted of system work, the day after a lot of players were given maintenance days.

–The Reign will hold morning skate on Friday at 10 a.m. before hosting Stockton at 7 p.m.