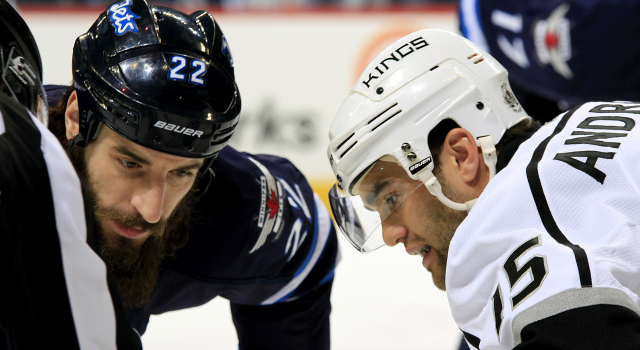 On the loss:
We couldn’t score the second goal. It was probably [a reason for the loss] . It’s the way it goes.

On whether the game was similar to the Minnesota game:
I think the difference from that game would be special teams. I thought tonight we scored a power play goal and killed Brownie’s four-minute in the second. We just couldn’t score the second goal. We had lots of chances to tie it up or go ahead by two and couldn’t do it.

On whether Winnipeg’s two similar third period goals were a concern for Jonathan Quick:
They were a point shot with a screen. That wasn’t a concern for the goaltender. One was a rebound that came back around to Byfuglien, and the other one was our defenseman threw it up the wall. Their defenseman was basically in the same place.

On facing a team well outside of the playoff picture:
It’s the salary cap, and after the deadline, there’s a lot of other guys that are getting put in lineups that are trying to make the team next year, so there’s a lot of energy. There’s a fine line between playing on the big team and not playing on the big team, so in terms of that … I think your schedule and things like that get into it more than anything else.

On Winnipeg having players trying to make an impression:
Hopefully so have we.