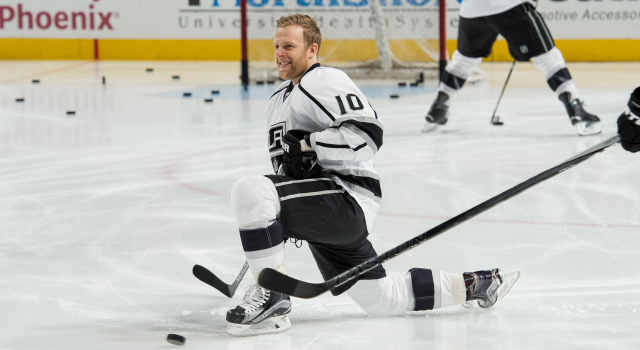 Good afternoon from St. Paul, where the team will be loading up the bus to head to the airport in just over an hour from now. There may be a few minutes added on to the short flight to deice, as snow is coming down in Minnesota’s capital. Two to four inches should fall in the Twin Cities; along with some flurries in Toronto, light snow in Boston and a quick storm that passed through Washington on the morning of President’s Day, this has been the only snow we’ve seen this season.

Kris Versteeg did not travel with the Kings to Nashville on Sunday. Before the team left on its three-game trip, Darryl Sutter deemed the forward “day to day” and said that “we’ll get him back on this trip some time.”

There isn’t any clear update on whether the team will indeed get him back for the trip’s finale in Winnipeg on Thursday. From some correspondence with hockey operations, Versteeg is undergoing treatment in Los Angeles this morning and will be evaluated afterwards.

After facing the Jets, the Kings will return home to play the Edmonton Oilers on Saturday before traveling to San Jose for a game against the Sharks on Monday. Los Angeles, Anaheim and San Jose all lost last night, so the first place Kings remain four points up on the Ducks and five points up on the Sharks. Anaheim has one game on hand on the other two teams.