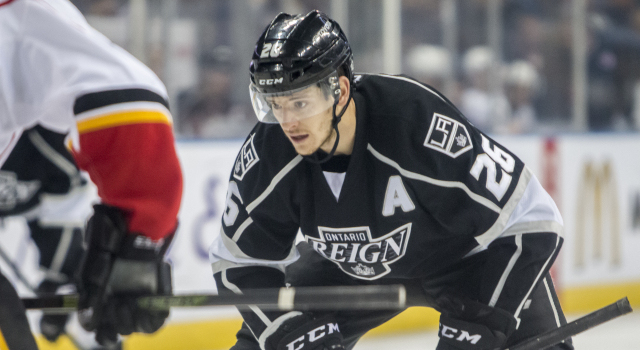 Update as of 5:02 p.m. PT: Dowd will be in the Kings’ lineup to make his NHL debut against the Minnesota Wild. Per LA Kings Insider Jon Rosen, Tanner Pearson will be out of the lineup due to a personal reason.

The Kings have recalled center Nic Dowd from AHL-Ontario.

Dowd, the Reign’s first-line center, has played in all 57 games for the Western Conference-leading squad and has 13 goals and 34 assists for 47 points. This is the first NHL call-up for the 25-year-old Dowd, who was a 7th-round selection by the Kings at No. 198 overall in the 2009 draft.

His recall to Los Angeles was a move that had been considered since late last week. He’ll miss tonight’s Reign road game against the Bakersfield Condors.

The 6-foot-2, 195-pound Dowd becomes the third Reign player to be called up to the Kings this season with the potential to make his NHL debut, following Michael Mersch and Kevin Gravel. The Kings play the Wild tonight in St. Paul, Minn., at 5:30 p.m. PT, but it is not yet known if Dowd will be playing.

When Dowd does get into a game, he’ll be the eighth of 10 players in the Kings’ 2009 draft class to play in the NHL. Both Dowd and Nolan were seventh round draft picks in 2009.

“This is a huge moment in Dowder’s career,” Reign head coach Mike Stothers said via text on Tuesday. “The coaches, and his teammates, are very happy for him and excited he is getting the opportunity. He is having a terrific season for us and it is nice to see him rewarded for the time and hard work he has put in.”

In his first full pro season a year ago, Dowd was an integral part of the Manchester Monarchs’ Calder Cup title run. He was nearly a point-per-game postseason player with 7 goals, 6 assists for 13 points in 16 games. Prior to playing in the Kings’ organization, the Huntsville, Ala., native, played four years collegiately with St. Cloud State and was a finalist for the Hobey Baker Award given to the NCAA’s top Division I player in his 2013-14 senior season.

This season, Dowd has played mostly in Ontario with Mersch on the team’s top line, and most recently with veteran Sean Backman. He also plays on the first unit for both the power play and penalty kill. He’s had a very impressive month of March posting 3 goals and 5 assists in 7 games as the Reign have gone 5-1-1. His 47 points are second for Ontario behind Backman’s 51.