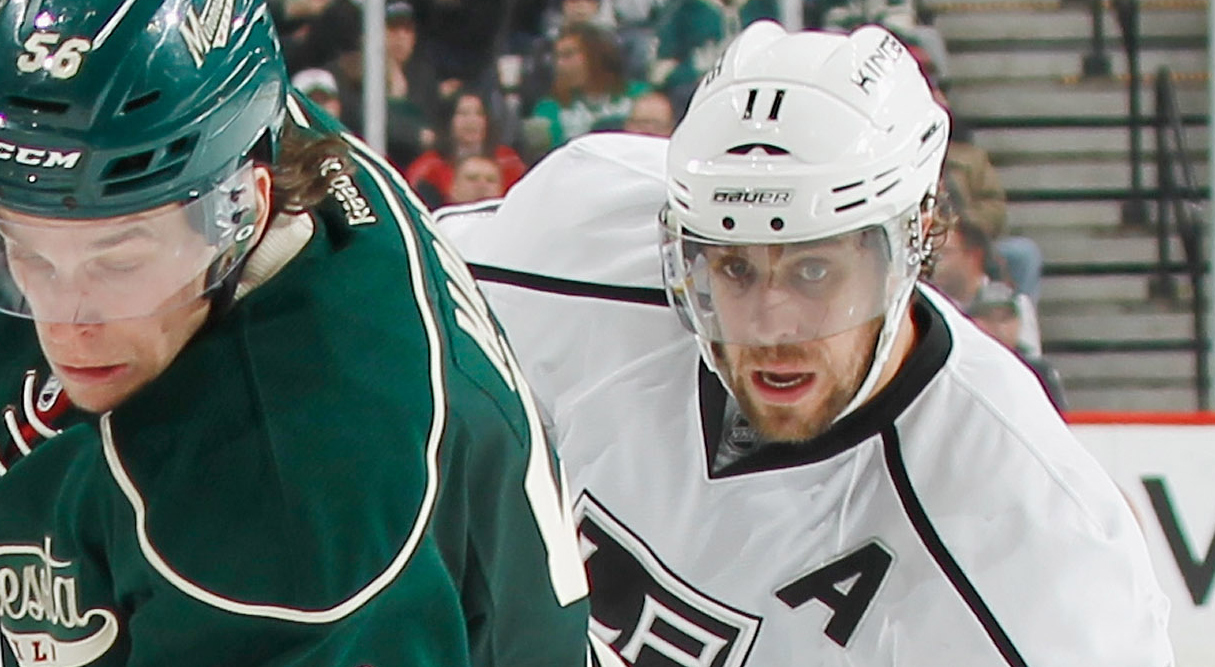 Anze Kopitar, on the team’s performance, difficulties finishing:
I thought it was better than it was yesterday obviously, you know special teams turned out to be the difference again, and we’ve got to figure out how to get a power play goal. There wasn’t many opportunities there, I thought we had some good looks, but we’ve just got to capitalize on that, and that was the difference tonight.

Kopitar, on the team’s power play struggles:
I thought we had some decent looks, I thought Drew in particular had some really good shots, they didn’t go in. When they’re not going in, it’s easy to get complacent and say ‘we were doing okay, we were doing okay,’ but we’ve got to figure out how to score, that’s the bottom line.

Kopitar, on if Devan Dubnyk’s performance was frustrating:
Yeah you’ve got to give him some credit, he’s been doing that for quite a while now so it’s not a surprise. It’s on us, we’ve got to do a better job and make it tougher on him; but credit to him, for sure.

Toffoli, on if the loss was frustrating with the number of chances the team head:
Yeah we had our chances, we just didn’t bear down on our opportunities. I think we call had a couple, more than one, we’ve just got to do a better job of putting the puck into the back of the net.

Toffoli, on Devan Dubnyk’s performance, if he seemed to be making saves with all parts of his body:
We’ve seen him before obviously, he made a couple of saves where it just kind of hit him, he made a couple saves where we had a great grade-A chance, and we just couldn’t capitalize, so I think we’ve got to work on that and bear down on our opportunities.

Toffoli, on if he enjoyed playing with Nic Dowd:
Yeah, I’ve played with him in preseason before and we’ve played a couple good games, he’s a good player, he deserves to be here and he played great tonight.

Toffoli, on if it helped having played with Dowd on previous occasions:
I think it definitely helped, but at the same time, [Mike Stothers] does a great job down in Ontario preparing all the guys when they get their chance, and like I said, Dowder played great tonight, he was dishing the puck and he was going to the net and he had his chances.

Nic Dowd, on contributing to a scoring chance:
I was trying to bump it back to Shoresy, I missed it, got a piece of it, it ended up working out and going to Muzz I think, and [Dubnyk] made a good save, it’s a tough break.

Dowd, on getting more ice-time as the game wore on:
Yeah, I was just trying to play a simple game, read off of the other guys out there, there’s a lot of veteran leadership on this team that started before the game, and you kind of build confidence off of them, so I just worked with what I was given, and it wasn’t the result that we wanted, but move on to Winnipeg.

Dowd, on how he settled in after taking a high-stick on his first shift:
Yeah it felt good, actually I felt really good, I think the adrenaline kicked in, and I was fortunate that my first shift was in the o-zone, not the d-zone, and just happened to take the high stick. I think I was lucky I got to play with Toff and Kinger all night, they’re two really good players.

Dowd, on his alma mater playing at XCEL Energy Center this Saturday, making his NHL debut in the same building:
Yeah, one could say that, I was pretty excited know I was going to debut in Minnesota, this state means a lot to me, the culture here is awesome, going to St. Cloud and stuff like that I had a lot of people in the stands that I wouldn’t be here without them. [Reporter: How many people were here for you tonight?] I don’t know exactly, I mean there were a half a dozen to a dozen important people in my life, and I’m sure there were a lot more supporting me too.

Dowd, on if Coach Sutter said anything to him before the game or went with the sentiment he’d played hockey his whole life:
I think that was kind of echoed by the rest of the team, the veteran guys told me I’d done it a million times, just go out there and do it again, don’t think. It’s a little easier said than done, but as the game progressed, I felt like I settled in.

Dowd, on where he got hit with the high-stick:
Right in the teeth, but luckily it wasn’t too bad, I think he only had one hand on his stick, so it was more of a reaction, my mouth guard saved me.