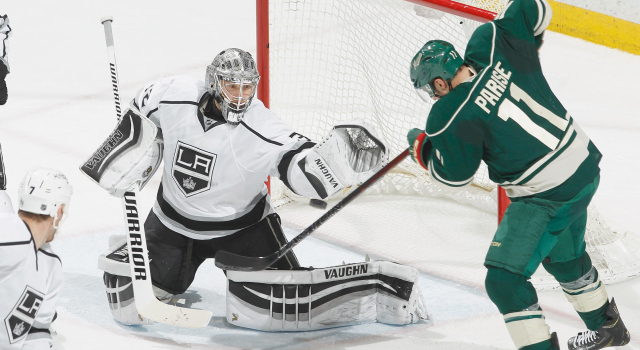 On whether it’s “frustrating” to have a “different effort, same result” as last night:
Yeah, it’s frustrating, but it’s not really a different effort. It was a great effort last night, too. It’s difficult when you look up at the clock and it’s eight shots and you’re down two-cob.

On generating quality looks on the power play but not scoring:
We missed some guys that score for us on the lineup, Jon. Missed some players. Nothing to do with the power play.

On Nic Dowd’s debut:
I thought he was solid. [Reporter: He was getting some good ice time in the third period.] You get called up, you get to play.

On whether Minnesota was a desperate team:
I was more watching our team than theirs.

On whether Dubnyk was the difference in the game:
Yeah, he probably was. But at the same time, it’s tough to score in this league, and as I said, we didn’t have Pearson tonight and Versteeg and Gaborik, so that means other guys have got to step up. Can’t use it as an excuse. You need to have that many shots, and you need to make sure that you keep your goals against at one or two and see if you can score. That’s how you win. That’s how you make the playoffs and that’s how you win in the playoffs.

On Tyler Toffoli’s goal:
It was a good play by Tyler. It was basically a power play goal. They weren’t back in the play yet.

On the reason to move Brayden McNabb back alongside Drew Doughty:
We’re comfortable with Scuderi or McNabb or whoever it is. It’s got to be a left-shot, and I don’t like splitting Muzz and Marty up.

On whether he considered a change when Jonathan Quick allowed a second goal:
No. He should’ve been well rested. He got a couple periods in last night.