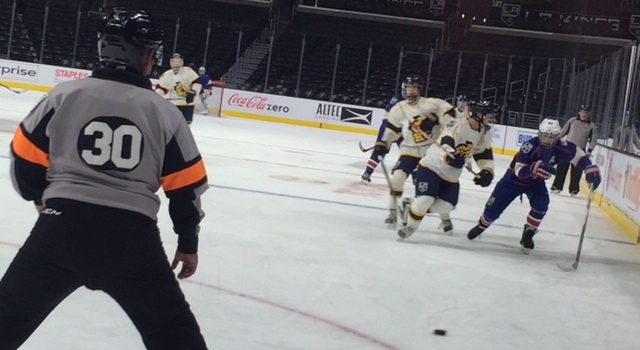 Prior to the Kings-Bruins game on Saturday, the Santa Barbara Royals defeated the Kern County Knights in the inaugural LA Kings High School Hockey Championship. The following has been redistributed with the approval of Paige Burnell, who reports on league-wide events while providing daily beat coverage of the East County Outlaws and serves as the sports editor for The Edge newspaper at Moorpark High School. For more reporting on the Championship, including post-game quotes from ex-King and current Santa Barbara head coach Steve Heinze, as well as the league’s awards, visit Paige’s site for comprehensive LAKHSHL coverage.

Santa Barbara Royal Colllin Del Bonis began the scoring for his team with a goal 3:08 minutes into the first period. The game became a battle after this goal woke the Knights up, and defense became their priority. They kept the Royals at bay as they disrupted the majority of their offensive set ups. Kern held their own as they had to kill a short series of penalties, one of which was a 5-on-3.

However, Jack Johnson found the back of the net on a power play awarded to the Royals with only 18.7 seconds remaining in the first. The Knights were without one of their top defensemen, Paul Daley, on this kill because he was the one who took the march to the sin bin.

The second period was very aggressive in nature as the Knights became frustrated, and the Royals matched their level of physicality. Santa Barbara did not do this carefully as they took several penalties in the course of the period, and some became 5-on-3 situations. Nonetheless, the effort of all the Royals and their goalie Will Hahn left the Knights without a goal despite some quality chances from the power play unit of Paul Daley, Blake Bourelle, Austin Hanson, and Sawyer Robinson. This is not surprising as their PK was 96.4% in the regular season.

This eventful period became even more so when Royal Jack Johnson scored on one of his team’s 5-on-3 penalties with 9:35 remaining. The Royals left for intermission with a three goal lead over the Knights.

As the third period started, it was evident the Knights were still putting up quite the effort because they kept the Royals scoring to only one goal. Chris Ewasiuk capped off the tally with the Royals fourth goal off of an assist from Jared McMullen. Furthermore, this period resembled the first in the way it went back and forth like the first period, and lacked the numerous penalties and scrums at the net which characterized the second.

The end of the game showed the spirit of winning any trophy in hockey as the Royals threw off their gloves, and charged their net in celebration. The trophy presentation followed, and Royals head coach Steve Heinze along with Ewasiuk received the trophy from Luc Robitalle. 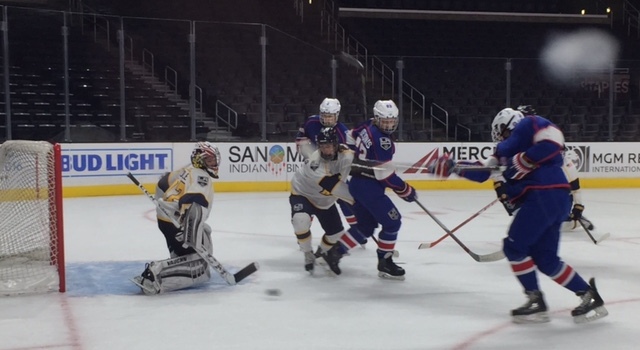 -Third Star- Kern County’s Hayden Desjarlais. Desjarlais played a key role in breaking up the Royals’ harmonized offense. The Knights’ stay at home defenseman limited the number of times the Royals were able to set up in the offensive zone. Additionally, his positioning and frequent poke checking forced the Royals out of the zone, which goes against their norm of staying there for extended periods of time.

-Second Star- Santa Barbara’s Chris Ewasiuk. The captain of the Royals, as usual, was given a lengthy amount of ice time with which he once showed his ability to perform in all situations. He assisted on a power play goal that put the Royals ahead by a score of 2-0 moving into the second period. In addition, he scored the fourth and final goal of the game.

-First Star- Santa Barbara’s Jack Johnson. Johnson scored two goals, both in uneven situations. The first came off the power play from an assist by Ewasiuk, and the second came while the Royals were killing just one of the many 5-on-3 penalties of the game. Furthermore, Johnson was a force on both ends of the ice as he also took part in shutting down the Knight’s offensive surges with effective checking.

Jack Johnson’s second period shorthanded goal gave the Royals a commanding 3-0 lead. It solidified the game’s result as it widened the deficit, and foiled the Knights’ chance to make it a one goal game. It also further frustrated the Knight’s efforts to get a much needed goal on the power play.

The Knights were unable to capitalize on a total of six second period power plays, and 4 of them overlapped to create 5-on-3 opportunities.

A post game reaction from Collin Del Bonis – “It was great. We knew we were going to do it the whole time, but we’re going to go do it again next season.”

The Royals are now set to play against the winner of the Division 2 Anaheim Ducks High School Hockey League championship, Capistrano United.

The Santa Barbara Royals are officially the first champions of the LA Kings High School Hockey league. They beat the Knights in a 4-0 shutout victory on Saturday at Staples Center. With the win, the Royals are left with a pristine 2-0-0 playoff record. As a refresher, the Royals beat the Aviators 8-0 in the first round. The Kern County Knights are 1-1-0 as the exit the postseason. Their first win came as they beat the 2nd seeded West Ranch Wildcats as a 3rd seed by a score of 6 to 3.

Additionally, the Royals’ win streak extended to 13 games. They never lost in regulation as the team only recorded one overtime loss (2-3) when they faced the Outlaws on 10/17/15.

The team had 14 wins in total in the regular season, and 6 of them were shutouts. The win total is 16 including both postseason wins and the shutout total 8. Royals goaltenders Brady Rotondo and Will Hahn often split tending duties within each game. Rotondo finished with a league high GAA of 0.82 and SV% of .939. Hahn took second place in both categories with a 1.38 GAA and .928 SV%.

As a side note, the goalie Kern County employed for the later part of the game, Jake Cole, was third in both theses categories with a GAA of 1.40 and a SV% of .909. 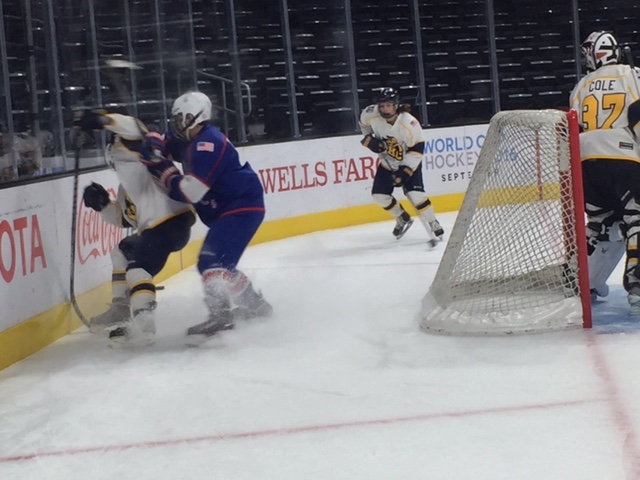 The Royals’ Jack Johnson (#3) scored two goals in this game, one of which came short handed on a 5-on-3 penalty kill, and the other on a power play. This brings his postseason total to a league high 5 goals. Johnson has had at least a point in the last nine games. He had 31 regular season goals, which was the second highest tally across the league, but first among defensemen.

Santa Barbara captain Christopher Ewasiuk(#9) scored the final goal of the game, and provided an impressive assist to Johnson’s shorthand goal. Ewasiuk had both 14 goals (tied 10th all league) and 14 assists (tied 8th all league) in the regular season.

Jared McMullen ( #10) of the Royals also had quite the side streak going as he has points in the last 8 games. He contributed an assist tonight, which bring his postseason total to 3 points. He put 2 goals in the back of the Aviators’ net in the previous game. His regular season totals were 17 goals (7th all league) and 15 assists (7th all league).

Collin Del Bonis (#63) started the scoring for the Royals tonight with his first goal, and his first point, of the playoffs. He produced 14 goals and 9 assists for a regular season total of 23 points.

The Kern County Knights were scoreless in this game, but battled throughout the entire season. In their upset victory over the Wildcats last weekend, defenseman Paul Daley(#12) had 1 goal and 1 assist. He was 3rd in regular season scoring with 29 goals, and 6th in assists with 16. Daley’s defensive partner, Blake Bourelle (#11) had 1 goal and 1 assist to match. He had 18 goals (6th) and 18 assists (5th) in the regular season. Power forward Austin Hanson (#28) put two behind the Wildcats in addition to 1 assist. He lead the league with 29 assists. Sawyer Robinson(#17) also netted two goals. He contributed 14 goals (10th) and 14 assists (8th) in the regular season to tie with Santa Barbara’s Ewasiuk in both categories.