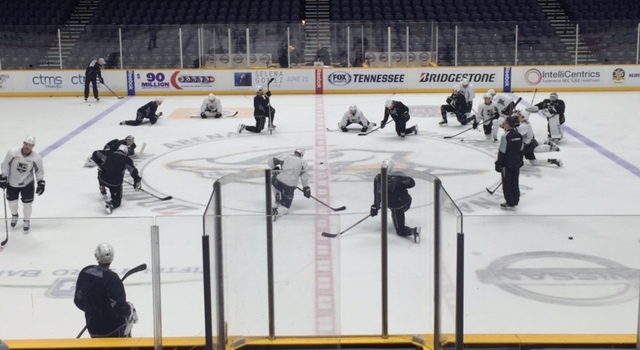 Good afternoon and a happy first full day of spring from Nashville, where the Kings have returned to the team hotel after a morning skate. At the skate, they aligned as such:

-Kris Versteeg did not take the ice with the Kings today in Nashville. His injury, as Darryl Sutter said yesterday, is “day-to-day;” Sutter said the team will “get him back on this trip sometime.” That won’t be tonight, as Andy Andreoff is poised to step back into the lineup for the first time since March 5. He has played 59 seconds since February 27, with that usage constituting his first period time on ice prior to a multi-fight situation on March 5 in which he and Kevin Bieksa picked up fighting majors and game misconducts.

-Jonathan Quick was the first goaltender off the ice. He’ll be expected to start in net against Pekka Rinne and the Predators. Quick was named the NHL’s second star of the week for his 3-0-0 / 1.32 / .953 stat line, which included his 41st career shutout in a 5-0 win over the Chicago Blackhawks last Monday that moved him atop the list of all-time shutouts by a United States-born goaltender. Quick ranks second in the NHL with 37 wins on the season. Sidney Crosby was named the league’s first star, while Sean Monahan picked up the bronze.

-The Preds are coming in hot with points in 16 of their last 18 games (11-2-5), so they’re not exactly an ideal first round match-up. But with Los Angeles atop the Pacific Division and Nashville solidifying their hold on the top wild card – they’re six points behind third-place Chicago and five points up on Colorado, which is currently slotted in the second wild card – there’s a decent chance that this could be a first round preview. “Yeah, we know that this is a potential match-up and obviously they do too, so both teams are going to be looking to getting a big W tonight and show the other team how good they really can play,” Drew Doughty said. In his mailbag, Adam Vingan of The Tennessean shares his take on whether it would be better for the Preds to finish in third or fourth place in the Central Division in advance of opening a first round series. A preview: Avoid California.

Always in a rush, slow it down with #slowmoMonday.https://t.co/OgbTYDpvS9

-Darryl Sutter didn’t speak with the media today, so the next story posted will rely heavily on quotes from Doughty and Trevor Lewis. Enjoy your Monday, Insiders; there’s Kings hockey in three of the next four nights. More to come… 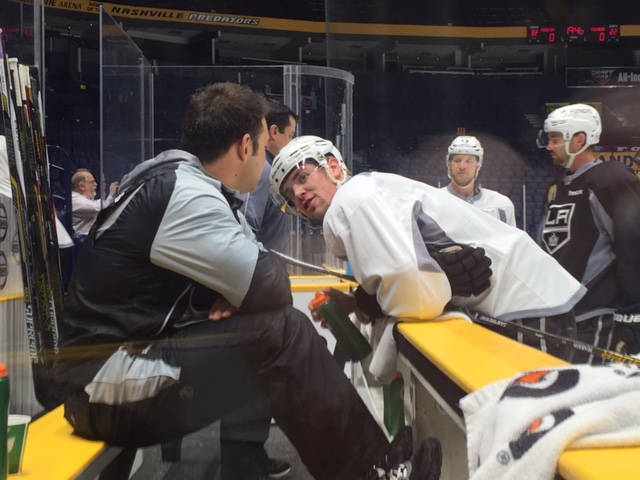