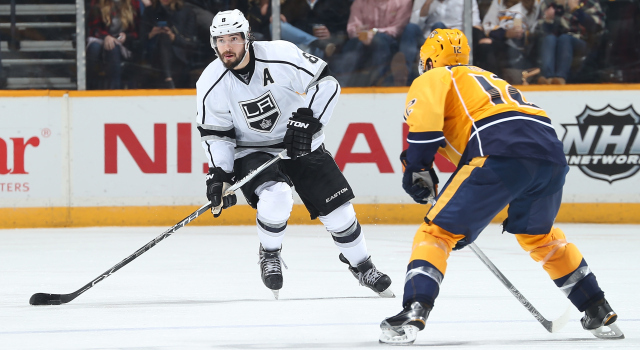 Very good hockey teams lose in the first round of the playoffs every season, and were tonight’s game to serve as a preview of a mid-April postseason series, that would continue to be the case.

Make no mistake, Nashville is a very good hockey team, and when considering potential first round opponents, there are hardly any preferred road maps towards the second round. In reality, the Predators’ 36-23-13 record and 85 points are depressed by virtue of a 1-12 record in games decided in overtime. With an overtime record close to .500, they’d be in the same position as the Chicago Blackhawks. Also, of note: Three-on-three overtime does not exist in the Stanley Cup Playoffs.

“I think it’s a good game for us because it is a potential first-round match up and I think we’ll go out and play our game and play hard, make sure they know that we play hard and are going to come hard,” Trevor Lewis said.

The hunt for two points will be first and foremost on both teams’ minds, but as Nashville defenseman Ryan Ellis said earlier today, “Teams are winning behind us and winning ahead of us, so we’re going to have to do the same. We’re still looking to catch the team in front of us, and that’s a challenge in itself, but … it could be a potential first round match-up. We’re out there just trying to win a game, and at this point in the season, it’s about winning.”

Both teams are highly capable of driving play, with Los Angeles leading the league in raw Corsi-for and Nashville ranking fourth, behind the Kings, Stars and Ducks. But the unique aspect of playing the Predators in a regular season game or over a best-of-seven series is the stable of terrific defensemen wearing gold, navy and white.

“They’re basically all pretty good puck movers,” Drew Doughty said. “Besides Weber – I guess Jackman, too – they’re going to bang a little bit and be good defensively, and the other guys are good skaters and good thinkers and stuff like that, so they’re tough to play against. For our forwards, it’s going to be tough to cover them. I think they’re one of the highest scoring defense groups in the league, so we’re going to have to pay pretty special attention to them in the D-zone and in the O-zone.”

Indeed they are, with their blue line accounting for an NHL-high 46 goals. Shea Weber may have both the biggest contract and the heaviest cannon from the point, but his defensive partner Roman Josi leads the unit with 51 points in 72 games and is as fluid and elusive of a skater as there is on any team’s back end.

“For a guy like Josi, he’s a great skater, he likes to get up in the play every single time, so if he has the puck down in his own zone and he’s making a play, we’ve got to finish him and we’ve got to beat him back to the offensive zone,” Doughty said. “While they’re in the zone, you’ve just got to be aware of where he is on the ice at all times.”

And, in his defensive zone, Los Angeles forwards will have to play the body.

“We focus on our game, but I think it’s about eliminating their D with the forecheck,” Trevor Lewis said. “Once we get pucks in, we try to get a hit on them and not let them beat us up the ice because they always want to join the rush and make it four instead of three, so we just need to make sure that we’re aware of that and do good things on the forecheck.”

So get familiar with Nashville, because there’s a decent shot that tonight’s game is an appetizer of what’s to come three weeks from now. That would be a disproportionate number of late winter and early spring Tennessee trips for Doughty and Jonathan Quick, the team’s All-Stars. The Predators hosted the All-Star Game in the final week of February.

“I like coming here, though,” Doughty said. “They’re a good team, tough to play against. It’s always a good match up.”

Drew Doughty, on tonight’s game serving as a potential playoff preview:
Yeah, we know that this is a potential match-up and obviously they do too, so both teams are going to be looking to getting a big W tonight and show the other team how good they really can play.

Doughty, on clinching a playoff spot:
We’re obviously happy to clinch a spot, but it’s funny, we clinched a berth the other night and it didn’t even feel like it because we didn’t play our best game against Boston and we weren’t happy with the way that we played, it didn’t even feel like we clinched a spot at all. All we’re looking to do now is obviously win our division and potentially the conference, we’re not done, we have a lot of work left to do, we have 10 or 11 games left and we want to win all of those if we can and be going into the playoffs on a roll.

Trevor Lewis, on Roman Josi:
Yeah he’s a great player, he’s a good skater, a good puck mover and he’s always looking to join the play, so we have to make sure we’re aware when a lot of those guys are on the ice.

Lewis, on the Boston game:
I think our PK was good, they had a few power plays there in the third and I think our PK beared down and won us the game, so we have to just keep carrying that over.