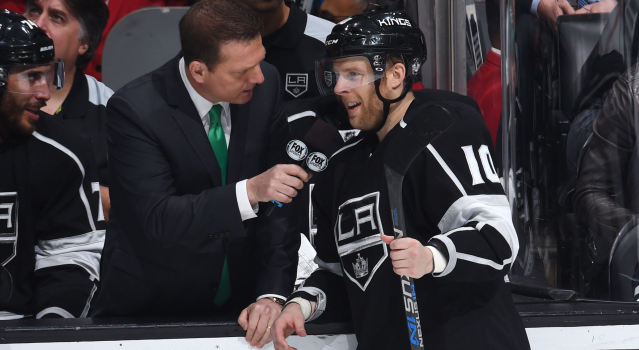 There appeared to be encouraging news on the status of forward Kris Versteeg, who did not return to Saturday’s 2-1 win over the Boston Bruins after blocking a Dennis Seidenberg shot with the tongue of his left skate in the third period. After the block, Versteeg painfully made his way off the ice and after a brief respite on the bench, hobbled down the tunnel.

“He’s day to day,” Darryl Sutter said Sunday morning. “We’ll get him back on this trip some time.”

The Kings are currently en route to Nashville, where they’ll open a three-game road trip that also includes stops in Minnesota and Winnipeg.

There were no details beyond what Sutter shared, but that Versteeg is considered “day-to-day” indicates that the injury will not sideline the forward for any wide expanse of time.

In eight games with the Kings, Versteeg has two goals, three points and a plus-four rating. In 71 games overall, he has 13 goals, 36 assists and a minus-two rating.

Versteeg left the ice early in the 3rd period after blocking a shot off his foot #LAKings #BOSvsLAK pic.twitter.com/Dj5rD18oL8