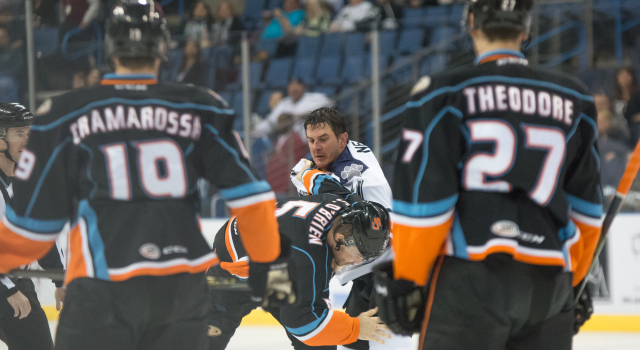 –The Gulls went up 1-0 when Corey Tropp chased down the puck after his shot from the right circle, banging it by Peter Budaj. Video courtesy of ieProSports:

–Another period, another early goal surrendered by the Reign in the second. Ondrej Kase stripped the puck from Kevin Gravel and beat Budaj low from the right circle:

–The Reign gave up goals in the first two minutes of each the first and second periods.

–The Gulls are the only team the Reign have a losing record against this season at 3-4-1-1. The Gulls improved to 7-3-0-0 in the head-to-head this season.

–The first line of Michael Mersch (minus-4), Nic Dowd (minus-3), Sean Backman (minus-3) finished a combined minus-10.

–Anton Khudobin, who does not have a shutout this season, saw his bid end with 7:29 left in the third period on Derek Forbort’s first goal of the season.

–Here are full highlights of the game: