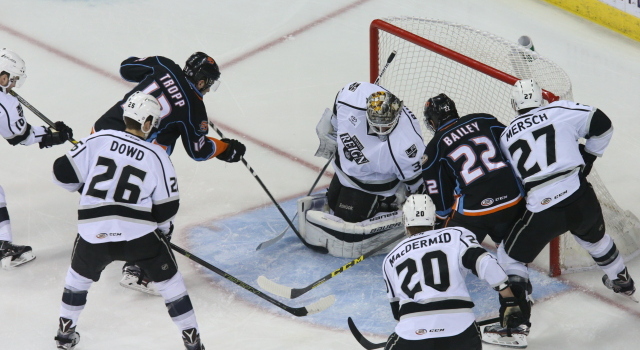 Reign head coach Mike Stothers, on why San Diego is so tough to beat:
It’s a good team. They’re big, they’re physical. Their back end’s big guys, they’re hard to get to the front of the net. It’s hard to win battles in the corners. They certainly don’t make life easy on us, that’s for sure. It’s a good team.

Stothers, on Mersch taking ownership of the loss:
We talk about the quality of individual of Mike Mersch, he’s minus-4. Backs is minus-3, Dowder’s minus-3. You don’t think those guys are going to be happy about that. That’s what makes them special. It’s pretty unusual for those guys to have a tough night. That’s minus-10 for a whole line, right? So, that’s unusual for them, right? And they take ownership. Proud guys, they want to lead the team. Tonight wasn’t a good night for them. That’s going to happen during the course of a season. And for every time we’ve been out here (during postgame interviews) and we’ve complimenting them and given them accolades and saying how proud we are, I’m still proud of them. I’m proud of him for owning up to the fact that he wasn’t very good. That’s a good hockey player, that’s a good team guy, that’s a good leader.

Stothers, on letting in early goals in the first, second periods:
There’s always parts of the game where you look back and ya shouldda, couldda, wouldda, you wish. You wish you don’t get scored on at the start of the first period a minute-thirty in. You wish you don’t get started the second period a minute-thirty in. You wish it’s not Dowd, Mersch and Backs getting scored on. It was a tough night for them. That was very rare and I’m sure it won’t happen again.

Stothers, on Khudobin’s goaltending:
Well, I certainly don’t want to say he wasn’t very good but I don’t think we tested him enough. He was good when he had to be but we didn’t get any sustained pressure. A lot of that is you got to get some credit to their D. They do a good job of boxing you out. It’s tough to get to the net for that second opportunity. There were some times he was scrambling around looking for the puck. I’m not sure he knew where it was but I’m sure sometimes I’m sure if you watch Budes I’m not sure he always knows where it is but that’s where your defensemen come in and help out, right? They played a good team game.

Stothers, on what the loss of LoVerde does to the lineup:
It makes a big difference but I keep making a statement that it’s not who we’re missing, it’s who we have. But he’s our captain. He’s our leader. He’s a big part of our back end. It did change our back end somewhat. It changes the pairings, it changes the minutes that are played. Vinny’s very reliable defensively but he’s pretty good offensively for us. Maybe that makes a difference in a game that’s tight and going down to the end. He’s a good character guy. It’s going to be a long time that we’re going to be out with him, or not too long but it’s going to seem long without him. Hopefully he can recover quickly and get back and join us and stabilize the pairings.

Stothers, on if he wanted his team to stay away from between-the-whistles play:
I didn’t see any of that tonight, did you? [Reporter: A little here and there, maybe.] There was two minors called on one side and three minors called on the other. Listen, you want to see some games, you want to see some wars? Go back a few years. There were 3-hour games. That’s a rivalry. The game’s changed. No.

Michael Mersch, on the start to the game and Gulls’ early goal:
I made a terrible play on the wall. That’s been my bread and butter all year. Started with that and then I went minus-4 tonight. They scored four goals and we lost 4-1. Starts with my terrible start. We’ve been trying to have good starts and it was my fault.

Mersch, on trying to engage San Diego:
They’re a physical team. I think we were just trying to get something going. Trying to get around their goalie a little bit. … They’ve beaten us a lot this year. Again, it goes back to what you said, the start. I made a bad play on the wall, they scored on it and it just kept going downhill from there. Minus-4 again, I went minus-4. That’s insane and yeah, it’s my fault.

Mersch, on what the team can do to get out of Gulls’ neutral zone pressure:
I think just getting back and supporting the puck, working really hard to get back. That’s all fundamental stuff when you’re working really hard to get back, you’re available, everybody sees you. And then you’re able to push up-ice with your centerman. That’s the little part of the game and that’s the little stuff that helps you win, not go minus-4.

Mersch, on why the Gulls are such a tough team for the Reign to beat:
I don’t know. I honestly don’t know. Seems like they have a different lineup all the time. Honestly I have no idea. Maybe we get too hyped up, maybe they get really hyped up and we don’t get hyped up enough. I don’t know. Again, it goes back to … I like to take each game individually and this game I had a really bad play on the wall in the first and they scored on it and I’m minus-4 and we lost 4-1.

Nic Dowd, on what they can do to improve and beat Gulls at end of season:
I thought we had a slow start. Not only that but we gave up two goals in the first minute of both periods and those hurt. …. Anytime you give up a goal right away like that it kind of sets the tone for the whole period. I think our starts obviously have to be better. Got to try and score the first goal for a change. Even against San Antonio, they scored the first one. It puts you behind right away, puts you behind the 8 ball right away and you’re constantly battling back. I think it’s much easier to play with the lead than it is to have to scrape back like that.

Dowd, on why San Diego is so hard for the Reign to beat:
They’re a good team like a lot of teams in this league. I thought their goalie played well. I thought our power play was OK. I didn’t think it was that bad. I think we have to contribute on the power play to win games like this. There’s not a lot of ice 5-on-5 so when those chances do come you have to take ’em. [Reporter: With that in mind, how tough was it not scoring on the one to open the third period?] That was tough. I actually don’t even remember it, but yeah it would have been huge to obviously get one right away. Same goes for them, they score the first minute of both periods and if we had done the same thing it kind of sets the tone for the whole third.

Dowd, on if there was a playoff-like atmosphere:
I think there’s a lot of emotion that comes with playing this team. Once again, people talk about playoffs but we’re not there yet. We haven’t clinched anything yet. When that time comes you can re-ask me the question and I’ll tell you how playoffs feel. Until then I think it was Game 55 or whatever it was and we’ll take our recovery day and get better throughout the week and get ready for Bakersfield.