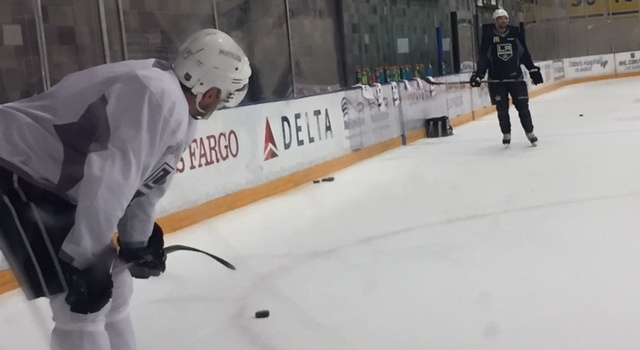 Good morning from El Segundo, where the Kings have wrapped up a morning skate in advance of tonight’s game against the Boston Bruins (7:30 p.m. / FOX Sports West / KABC 790 / I Heart Radio). There were no changes to lines from those used against the Stars and Rangers:

-Jonathan Quick left the ice first at the morning skate and will be expected to start against Boston. Jhonas Enroth remained on the ice for extra work with Andy Andreoff and Jamie McBain, so they’re probably out. Matt Greene did not skate.

-Boston is 0-2-0 on their three-game California swing following a 3-2 loss to San Jose on Tuesday and a 4-0 loss in Anaheim last night. Despite the two losses, they’re still 23-9-3 on the road this season. “I’m not into finding weaknesses, because there aren’t many,” Darryl Sutter said. “They’re basically very similar teams that are used to having some success.” Despite their back-to-back losses, the Bruins are still 18-9-3 in their last 30 games. Expect Tuukka Rask to start in net after Jonas Gustavsson allowed four goals on 26 shots last night.