LoVerde out ‘a couple weeks’ with neck/throat injury 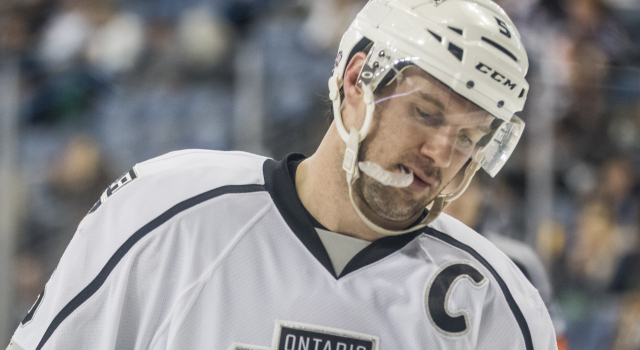 The Reign will be without the services of their captain Vincent LoVerde for an extended time.

The defenseman was injured in Wednesday’s 3-2 overtime win against San Jose when he was hit in the neck by a Jeremy Morin high stick at the 8:47 mark of the third period. LoVerde finished the game and actually scored the overtime winner for his 11th goal of the season. He missed his first game on Friday against San Antonio after 55 straight appearances.

“He’s going to be out a couple weeks,” head coach Mike Stothers said after Friday’s 5-3 win over the Rampage. “The power play we got the other night in San Jose was because Vinny got high-sticked in the throat.

Stothers called the injury a neck or throat injury, but reassured multiple times that the captain was OK.

LoVerde, an All-Star selection this season, leads all Reign defenseman with 11 goals and 21 assists for 32 points and is fourth on the team overall in points.

Stothers added that the team doesn’t anticipate the need for an immediate call-up as the team has some options, including Zach Leslie who’s been a healthy scratch in recent games.

The biggest adjustment will be for rookie Kurtis MacDermid, who had not played a single game before Friday without LoVerde as his partner. With LoVerde out of the lineup, MacDermid played with Kevin Gravel on Friday. That shuffled Derek Forbort, who’s usually with Gravel, to a pairing with Kevin Raine. Jeff Schultz and Nick Ebert remained the untouched pair.

The trickle-down effect of LoVerde’s absence will be immediately noticeable as he’s a top-four defenseman and a starter on the power play. The Reign have four weeks left in their season and just 12 games, starting with Saturday’s game against visiting rival San Diego in Ontario.