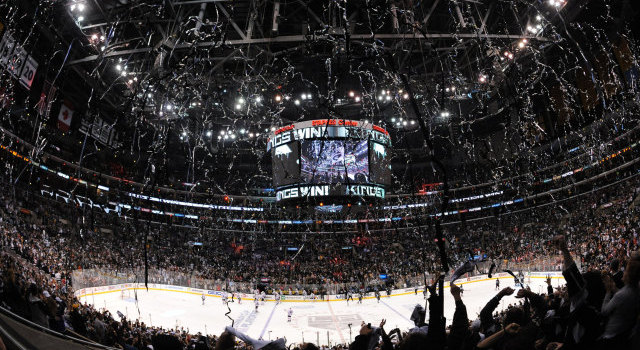 With Los Angeles’ win over the Boston Bruins and the Arizona Coyotes’ regulation loss to the Tampa Bay Lightning, the Kings have officially qualified for the 2016 Stanley Cup Playoffs. It is the 29th time they have qualified for the playoffs in franchise history and sixth time in the last seven seasons. With 11 games remaining in the season, this is the earliest they have clinched a playoff berth under Dean Lombardi.

“It’s huge. That’s the goal of the season, is to clinch a playoff spot, especially as early as you can,” Milan Lucic said. “You know, last year, falling just short, it definitely gives you motivation in the offseason to come in and have a good season. There’s still 11 games left and we want to finish as high up as we can in the standings, hopefully we keep playing that hard-nosed style of hockey, that playoff-style of hockey. It’s a great accomplishment, it’s been a fun 71 games so far and I think we need to keep the foot on the gas pedal and keep it going.”

The earliest the team had clinched under Lombardi in previous seasons was in 2013-14, when they had clinched with five games remaining. The only other team to have already qualified for the 2016 Stanley Cup Playoffs is Washington, which is running away with the Presidents’ Trophy with 107 points through 70 games.

According to the Kings, the first opportunity for fans to buy playoff tickets for home playoff games in Round 1 will take place in early April. Tickets will go on sale to club Season Ticket Members beginning on April 4 (with other presales to follow) and to the general public beginning on April 7. Private suites for Round 1 and 2 are on sale now by calling 1-888.KINGS.LA. Including playoffs, Los Angeles has sold out 196 consecutive games.

11 games remain on the schedule, and it is far from clear whom the Kings will match up against in the first round. With 93 points in 71 games played, Los Angeles is six points up on second-place Anaheim, though the Ducks have a game in hand. Third place San Jose has 86 points in 71 games played. Were they to win the Pacific Division, Los Angeles would match-up against one of the Western Conference’s two Wild Card teams. Were they to finish in second or third place, they would face a divisional opponent.

The first overall seed in the conference is far from settled. In 73 games, Dallas has garnered 95 points, while second-place St. Louis has 93 points in 73 games and third place Chicago has 90 points in 72 games. The full standings can be found here.

Los Angeles opens up a three-game road trip in Nashville on Monday night before visiting Minnesota on Tuesday and Winnipeg on Thursday.