Clinch a playoff spot tonight? That’s news to the Kings 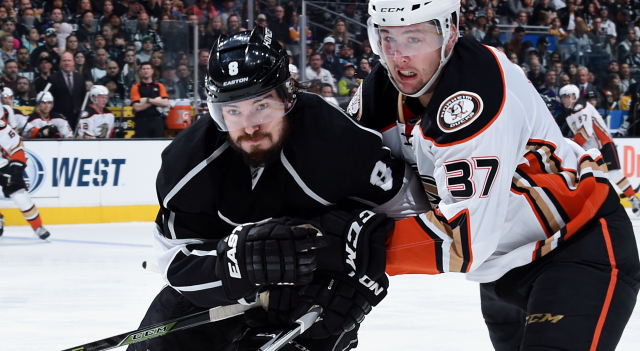 As much as the Kings are Trying To Be A Playoff Team, there was little notice to the fact that they could become one as early as tonight.

“I found out just now,” Dustin Brown said upon being asked about whether he was aware of the team’s clinching scenarios.

There’s a good reason for that. The team is 70 games into the season and has the blinders on in advance of tonight’s game against the Boston Bruins, who have been an excellent road team this season but enter tonight with losses in back-to-back games to begin their three-game California swing.

Soon there will be a check mark alongside the team’s stated goal this year of qualifying for the postseason, and once achieved, that goal will likely evolve. It could be related to playing as many home games in the playoffs as possible.

Dustin Brown, on whether Darryl Sutter reiterates the postseason goal to the team:
I think that’s when you set out at the beginning of the year, you have to give yourself a chance, right? Again, we’ve been in the playoffs as a last seed and we’ve done good things. We get to the playoffs, that’s the main goal, then you hit the reset button. It’s a new season, and you start focusing in on whoever you’re playing in that first round. Up until you get that playoff berth, all of your focus is on making the playoffs, quite honestly. If we clinch tonight, I don’t know the situation, but then you maybe you try to focus on getting your game in order for one, but you’re right in the mix there, so just keeping pace and trying to get home ice.

Drew Doughty, on whether the team is aware they can clinch a playoff spot tonight:
No, I didn’t know that one. I don’t think anyone on our team knew about that, but we’re not really worried about just clinching a playoff spot, we’re looking at the ultimate goal, which is winning our division or winning our conference, so yeah, I don’t think too many guys are looking at it as ‘yeah, we’re going to clinch a spot tonight.’ We’re just looking to get two points and continue from there.

Doughty, on any renewed focus with the team as of late:
No, this is a fun part of the season, games 30-to-60 there, they’re not the same as playing the last 10 games of the year. These last 10 games mean a lot, they can either have a team rolling into the playoffs, or a team not playing well, and then probably won’t be successful into the playoffs, so these games are a lot of fun. Like I said, we’re fighting for top in our division, which we haven’t be able to do ever I think since I’ve been here, so that’s an exciting time for us and we’re really determined to do that.

Doughty, on the team’s focus after 70 games:
We’re looking to obviously improve. There’s always areas for improvement even though we’re winning hockey games. We’re still not playing perfect hockey games, it’s basically impossible to do that, but we really want to make sure we’re continuing to use four lines as much as possible, and three D-pairings. When our whole team is playing well and when everyone is involved in the game, that’s when we’re most successful, so yeah, it’s important to keep doing that.

Dwight King, on the opportunity to clinch a playoff spot tonight:
I wasn’t aware of that until now. Obviously I think everyone’s focused on getting points. The more points you collect, the sooner you clinch, I don’t think that changes, We’ve got Anaheim right behind us, so that’s probably more of the mindset right now.

King, on the last meeting against Boston:
It was tight for about a period, but once they went in, we were shooting around 80 percent, and that’s not going to happen very often. They’re going to remember that too, so tonight, we’re obviously going to expect what they were like maybe the first 10-15 minutes of that game, so it will be a nice test for us.

King, on the Bruins:
They’re a quick team, a transition team, obviously some skills forwards up front, they’ve got Bergeron and Marchand who have a lot of production for them, so you have to be aware of those guys, and on the back end, they just try to move pucks up to their forwards, so you’ve got to be aware of their offense and their transition game, like most East teams.