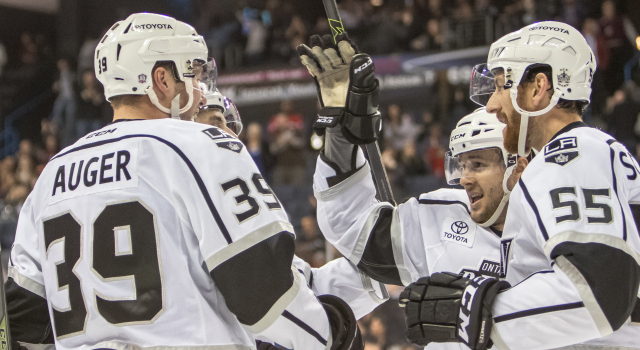 Reign head coach Mike Stothers, on what he takes away from this game:
Well, I mean, you feel good because you won. I don’t know why we do that to ourselves. We came out a little bit sluggish, a little bit tentative and we’re down by 2. So, can’t explain it but we are a resilient bunch. The end result is what we are looking for, I’ll just let it go at that. [Reporter: But does it alarm you at all with the slow starts?] Do I look like I ever get alarmed? I have faith in our guys, I trust our guys. It’s not too often, with the exception of the most recent game in San Jose, that we were brutal from opening faceoff, to the final buzzer, that doesn’t happen too often with this group. I just don’t want us to have to keep doing it. We’re getting down, it’s 12 games left and you’ve got playoffs, the first round’s three out of five, you can’t afford to have stinkers or think you’re going to play from behind. That’s tough, three out of five in that first round? That alarms me.

Stothers, on how slow starts can be rectified and the reason behind them:
There’s no magic, you just prepare. I didn’t have a great feeling in the morning skate this morning when I watched our guys. Just the execution, the way we were moving the puck around. It’s just a matter of getting a feel for your group. But, to be honest, you never want to make excuses, we’ve been on the road a lot, there’s been a lot of travel. It’s not like there’s a lot of games, we’re not play 76 games we’re playing 68, but once you get out of your normal routine it kind of messes you up a little bit. If you’re on the road, stay on the road and if you’re at home, stay at home because then you can kind of get into that normal groove. … I think we looked like a team that needed one more day. So, hopefully today was that one more day and we’ll be better tomorrow against San Diego.

Stothers, on the two goals the Reign gave up:
We had some video of things we needed to improve on. We weren’t getting back, we weren’t working to get back in our own end to even break out. We were getting back and arriving just as the defensemen were making the pass to us. We were still going in the wrong direction. We weren’t going towards their end, we were coming back towards our end. We weren’t working. That’s never good. You look at the one goal we got outmuscled on the wall, knocked right off the puck, none, he’s not that big a guy. And then it ends up in the back of your net. And then you’ve got a guy standing wide open in front of Budes. I guess Budes must be pretty good because we figure he can just stop everything. Two missed defensive zone assignments. That tells me that our team is not quite on top of things mentally. But that’s the thing. That’s when I know we’re not quite thinking clearly or we’re not quite in sync. Just things like that, that’s not normal for us.

Stothers, on Brett Sutter’s two-goal night and how he’s fitting in:
He’s fitting in real well. He likes the top shelf. He likes to go up high. He gets it up in a hurry. He’s fit in well. I think you’ve seen a guy that’s excited for being with a team that’s — not that we’ve clinched anything — but it looks like we’re going to make the playoffs whereas Iowa wasn’t. He seems enthusiastic and I think he likes the way our team plays. He’s a veteran guy, he has 600 AHL games. He’s been very valuable for us in the faceoff circle. He’s turned out to be a great penalty killer and now he’s stepping it up and becoming a guy that’s producing. It’s been a great fit. And I was happy for him. His mom and brother were here tonight. I know they were excited to see him and I know he was happy to have them here. I think in a few more days his wife and the rest of his family will join him so that will help him settle right in with the guys.

Stothers, on facing San Diego tomorrow:
I already laid out a gentle reminder after the game. I said ‘enjoy this victory for about 30 seconds, and then start thinking about tomorrow, already.’ This is a big game. I don’t think that I’d be stepping out of line by saying they don’t like us and we don’t like them. I think that’s healthy. I can’t wait to put my head on the pillow and wake up tomorrow because I know it’s game day against San Diego, and I can’t wait. And I hope our players are the same. It’s fun hockey. Not that tonight wasn’t, no disrespect to San Antonio because I have utmost respect for all our opponents and all our opposing coaches but, you know what, there’s something about the Reign and San Diego. Gets the juices going.

Stothers, on Vincent LoVerde’s injury:
Vinny’s out, I was just talking to the docs. He’s going to be out a couple weeks. The power play we got the other night in San Jose was because Vinny got high-sticked in the throat. (Note: That penalty was on the Barracuda’s Jeremy Morin at 8:47 of the third period). Turns out that there’s a little more to it than we even recognized. So there’s a guy that finishes the game and scores the game winning goal in overtime. So that tells you everything you need to know about your captain. But, he’s going to need some time. But he’s OK, but he’s going to need some time.

Brett Sutter, on contributing in a home game:
It felt really good. Obviously when you come to a new team you want to try to find ways to contribute. Tonight felt good to get on the scoreboard but most importantly just a big come-from-behind win and an excited locker room after and that’s what we’re here for.

Sutter, on playing with the Reign:
Just an opportunity to play with some really good players on a really good team. Just that environment of expecting a lot from each other makes everyone that much better player and got a couple lucky breaks so far and hopefully keep that going.

Sutter, on how he’s fitting in:
Good. I think every day getting a little more comfortable just with the environment, the system, the players, the names. All that stuff that goes along with it. I think the system fits my game pretty good: in your face, hard-nosed, I don’t want to say grinder but up and down type of game. It suits my style well and like I said hopefully keep adapting to that.

Sutter, on tonight’s comeback and recent comebacks:
I think we need some better starts, first of all. I think tonight we were a little slow out of the gate again. A couple big shifts, some big hits and some fights stuff like that got us going and then we scored some big goals, but I think in general we’ve got to start putting the gas down a little earlier and start getting some pucks to the net. I think that’s three or four games in a row where we sat back a little bit in the first.

Sutter, on his fight to defend Kempe and if it was because Kempe’s the youngest on the team:
Probably a little bit but I think more so he’s just another teammate. He’s wearing the same jersey as you and you want to go and stick up for every guy on your team. Doesn’t matter who it is. Just know that if it happens to you he’s going to do the same thing, kind of thing. We’ve all got each other’s back out there.

Justin Auger, on his goal:
I think they just forgot about me out there and I was all alone and it kind of just dropped and [the goalie] was sliding one way and I got a good whack on it and it just went up and over his pad.

Auger, on the comeback after the tough start:
Like I’ve said before, we got no quit in our team. Obviously it feels good we got the two points, it’s just another learning experience. Starting off slow, we’ve got to come out better and we know that. I think it was obvious that we didn’t have our best start but being able to turn it on and score some goals quickly is something that we do pretty well.

Auger, on turning the game around:
We kind of just took it upon ourselves. We had to get more energy on the bench and get the boys going. We scored a couple goals, couple fights, couple hits and just got the energy up all around.

Jonny Brodzinski, on his goal:
A lot of that was Ebert kind of coming up the ice and he faked it to the left pretty hard and I think it made that defenseman and that far side winger kind of bite and he ended up giving it to me, the seas were parted for me. Just kind of jumped in the middle of them, tried to flip the puck over their sticks where they wouldn’t get a stick on it and it was pretty much a breakaway from there.

Brodzinski, on his line with Sutter and Kempe:
Me, him and Kemps were really going tonight. It helps when Kempe’s skating, that’s for sure, creating a little bit more room for us and stuff like that. I think Brett had a great game. He’s a hard-nose guy, obviously you see that with the fight too. He’s a tough guy to play against.

Sean Backman, on his goal:
It was kind of an interesting breakout there kind of weaving in and out with Merschy and Dowder and then there was a scrum along the wall that got passed out to me and I stepped into it and put a pretty good shot on net there.

Backman, on the five goals, all mostly going high:
Guys made a lot of good shots tonight. Actually some really good shots, so credit to those guys who scored tonight.

Backman, on what he takes away from the game:
I think it’s just kind of a reminder of how we can play. There’s no excuse for us to start like that. I don’t know if there’s one reason why we started like that or what but it’s kind of a reminder of the team that we really are and how we play when we actually do play. Going into a game like tomorrow night, a slow start is not what we want. We want to play like we did in the last two periods.