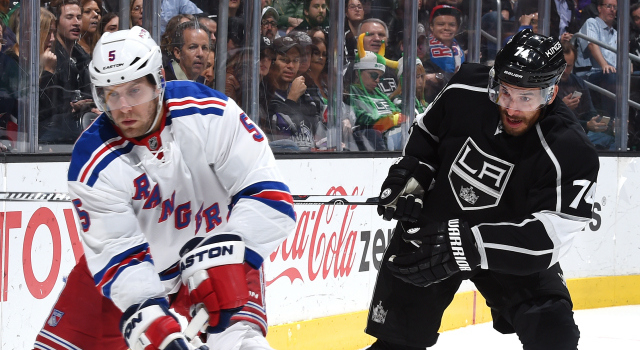 Alain Vigneault, on whether there was goaltender interference on Anze Kopitar’s first goal:
What did Hank say? [Reporter: He was very upset.] What did he say? [Reporter: He said I can’t believe the officials can look at it a second time and still determine it to be a goal.] Well, I agree with my goaltender. At the end of the day thought it really doesn’t matter what he thinks or I think. If we ask about it they’re going to have a great explanation to why it was a goal and we’ve just got to deal with it and move on, focus on the next game now.

Vigneault, on losing battles to Kopitar on tip-in goals:
He’s a big, strong, premiere player in this league and they’re tough to handle. Our guys gave it everything they had tonight and we’re going to go to San Jose, re-energize and get ready for an afternoon game.

Vigneault, on explanation of challenges:
I just commented on the one tonight and I’m just going to leave it at that and let you guys find the explanations. [Reporter: Is it hard that this is always a topic of conversation?] Well, I think everybody’s trying to get it right and I’ll let you decide if we’re getting it right.

Henrik Lundqvist, on no goaltender interference called on Kopitar’s first goal:
I think you just got to play with the rules. The rule is you can’t have a guy in the crease. I can’t come out to play the shot and as a goalie when you try to make the save you have a forward motion and it he doesn’t make an effort to get out. And I can’t believe the ref after watching it, not getting it right. That means that you can pretty much put a guy in the crease and as long as the goalie doesn’t get run over, it’s a good goal. That’s the way I look at this call. [Reporter: Marc Staal said it’s almost different referee to referee.] Yeah, but now you get a chance to watch it, I think you should be able to get it right. That’s my opinion.

Lundqvist, on losing the lead in the third period:
I think it comes down just making really smart plays the last 5-6 minutes and not put ourselves in a tough spot. It’s a good team and they kept coming and you just have to be really smart with the puck. That’s been our recipe in the past couple years. The last 5-6 minutes you don’t give them much, but again, we did a pretty good job … The third one was just really tough, tough goal to accept. [Reporter: Is there still emotion in this building for you?] Well, when you get calls like that definitely flashback, no question.

Derek Stepan, on the Kings’ push in the third period:
We sat back a little bit but they gained some momentum on their first goal and again it’s something that’s out of our control but I think it’s goaltender interference. I think it’s a pretty easy call. It cost us a point tonight.