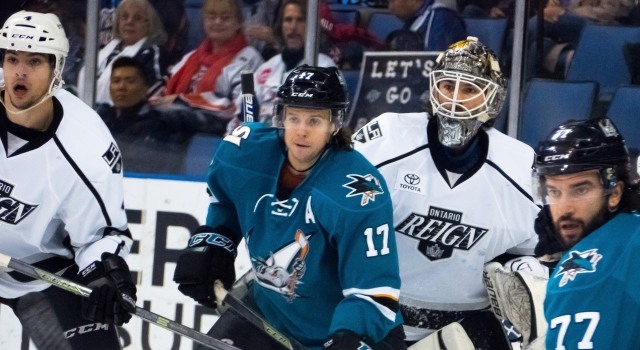 Reign game breakdown
Vincent LoVerde scored 23 seconds into overtime as the Reign (36-14-4-1, .700 winning percentage) picked up another two valuable points in San Jose in a 3-2 victory. The Reign fell behind 1-0 after the first 20 minutes, a period that head coach Mike Stothers said afterwards was the worst he’s seen his team play in two years. As they started to slowly get into the game, their power play was the difference. Sean Backman scored on the man advantage midway through the second period and Adrian Kempe followed with another in the third, putting the Reign ahead 2-1. Just 33 seconds away from the win, the Reign saw San Jose’s pressure with goalie Joel Rumpel pulled result in a 6-on-5 equalizer, a tip-in by Bryan Lerg past Reign goalie Peter Budaj. At the puck drop of overtime though Ontario took over as Michael Mersch threw a shot from the high point off the back boards and an alert LoVerde jumped at the opportunity to poke the puck by Rumpel. The Reign leave San Jose with all four points after a 4-1 win on Sunday and see their magic number to reach the playoffs shrink to 9 with 13 games remaining. Ontario also improved to 9-2-0-0 against the Barracuda (26-21-7-3, .544).

Three stars
–Sean Backman – Fifty never looked so good, so they say. Backman became the first on the Reign this season to reach 50 points (18 G, 32 A) with his power play one-timer in the second period. The All-Star has been extremely steady all season, but has seen his production increase even more so as he’s been reunited on the top line with Nic Dowd and Michael Mersch. The veteran right wing has two goals and six assists in his last five games.
–Vincent LoVerde – The captain’s offensive ability gives the Reign nearly a forward-like option in overtime when he starts. That’s what happened here as he and Mersch flipped roles a bit and he buried the winger’s shot that went off the end boards, finishing the play sprawled out belly-first on the ice. LoVerde even sacrificed his body a bit in this one, being boarded and high-sticked, both sending San Jose on the penalty kill.
–Peter Budaj – The Reign goalie has now allowed two or less goals in six straight games and added to his league lead by notching his 34th victory. In a game where the shots were a lopsided 30-16 in favor of the Barracuda, he gave his group enough support to work through a game that felt at many times that was theirs to lose.

Turning point
With the Reign struggling to find any offensive punch to their game, a power play set things off in the right direction. LoVerde was boarded by Trevor Parkes behind the Reign net, resulting in Ontario’s third power play of the game midway through the second period. Dowd won the ensuing faceoff and Kevin Gravel moved the puck to Backman on the left wing, who one-timed on shot through Rumpel with Mersch in front providing the screen. The goal came just 8 seconds into the power play and tied the game at 1.

Stat fact
–9 – The Reign were a perfect 9-for-9 on the penalty kill in two games in San Jose.

This and that off-ice
Some members of the Reign took in the Golden State Warriors game on Monday during their day off in Nortern California. … Goalie Michael Houser remains on a conditioning assignment with the Manchester Monarchs. … Forward Derek Army, who played in 12 games with the Reign earlier this season, was signed to a PTO by Pacific foe Texas on Monday.

Next up
The Reign are flying back to Ontario on Thursday morning and will play a back-to-back on Friday and Saturday. On Friday at 7 p.m., they face San Antonio for the final time in the regular season. Saturday they’ll host San Diego at 6 p.m.