Waking up with the Kings: March 15 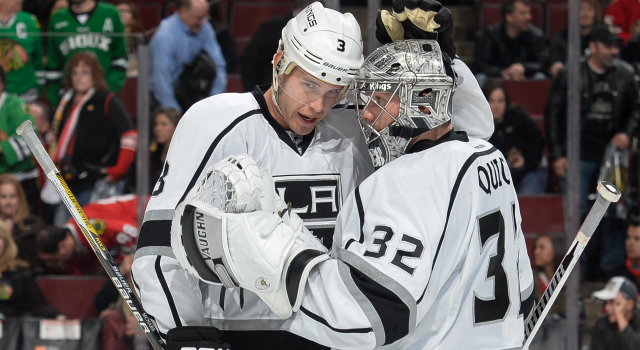 Jonathan Quick came up with big saves early, late and throughout the Los Angeles Kings’ 5-0 victory over the Chicago Blackhawks Monday night as he served as the backbone of an important and impressive win that came during a particularly grueling swath of the schedule in which the Kings tackle several high-profile, playoff-bound teams. He was credited with five saves on the Blackhawks’ power play that came one minute into the game, providing a base from which Los Angeles, after gaining an offensive zone draw, notched the game winner 3:17 in when Kris Versteeg buried Brayden McNabb’s point shot after Anze Kopitar won a faceoff against Teuvo Teravainen, a shift that won’t go on the young Finn’s personal demo reel. 18 seconds later, Milan Lucic scored off the rush when afforded ample cushion from Brent Seabrook. While that was an important goal that established a two-goal lead, the first period had so many chances at both ends that it wouldn’t have been any real surprise to have seen scores of 2-2, 3-2, or any other three, four or five-goal combination. Jonathan Quick was very good early and ensured that Los Angeles would play with the lead for 56 minutes and 43 seconds.

The Kings checked much better in the second period, and Trevor Lewis’ stick check and box-out of Andrew Ladd on a high quality rebound attempt to Quick’s right not only saved a goal but eventually sent the play in the other direction, where Lewis earned an assist on Vincent Lecavalier’s open net goal in which Corey Crawford pulled a Louis Domingue and gave up on a play in which he weathered indistinct, incidental contact but did not appear to be the victim of any sort of clear goaltender interference. That checking set up a strong third period in which Chicago out-shot Los Angeles 10-5 in five-on-five play but generated the majority of their looks from outside high-danger areas; War-on-Ice still credited the Kings with a 7-6 scoring chance advantage (and a 3-3 draw in high-quality scoring chances) while at even strength. It was suggested after the game that the Blackhawks may be more equipped than most teams to play from behind because of the natural skill with which they play and the dangerous looseness in their attack – lobbing the puck up ice and off the glass to force one-on-one battles between their skilled forwards and the opposing defensemen has always seemed to be an inherent part of their offensive thrust, whether when trailing, leading or tied – but the Kings improved their structure and avoided scrambling as the final two periods elapsed.

Los Angeles got two goals from its top line, one goal from its second line, two goals from its third line and key contributions (see: Lewis) and regular minutes from its “fourth” line. This was, of course, against the defending champions and not the Edmonton Oilers. The team-wide contributions and lopsided win was a boon for a team playing the first night of a back-to-back with significant travel involved. Drew Doughty was limited to two minutes below his seasonal average, and if we’re talking defense, the plus-three efforts from the chemistry-cultivating duo of Brayden McNabb and Luke Schenn – the latter of which issued eight hits and blocked six shots – rounded out a back end that was able to limit multiple opportunities around the net and quality looks from the home team’s top players as the second and third periods elapsed. They’ll need to replicate their performance against another extraordinarily skilled team in Dallas that skates very well but does not regularly play with the same top-tier structure as Los Angeles. 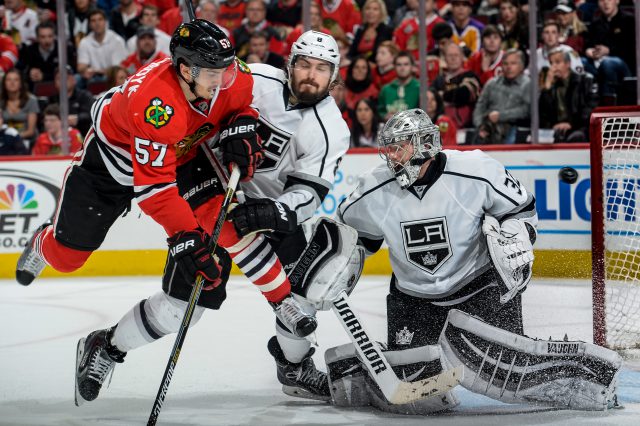