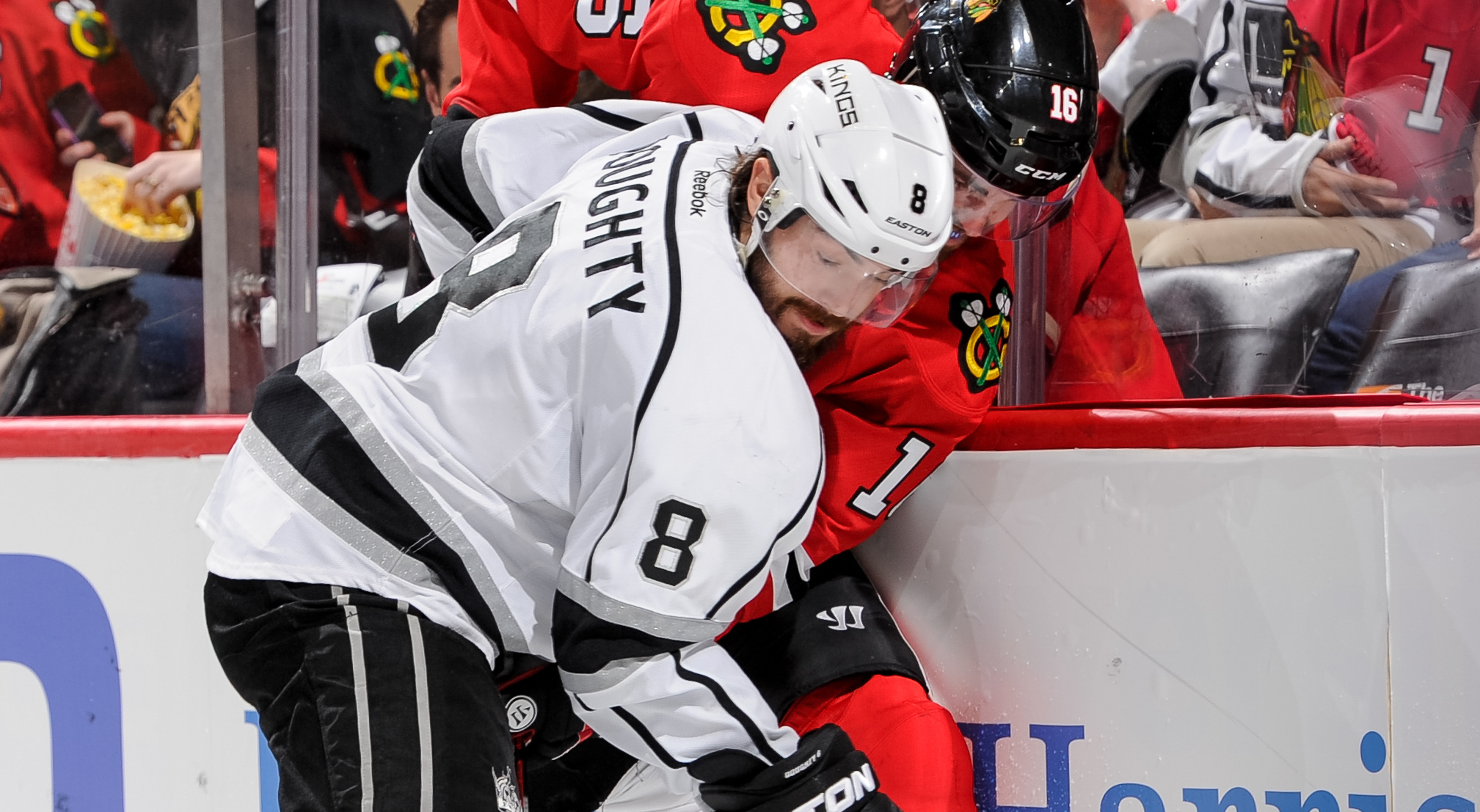 Kris Versteeg, on how it felt getting his first goal in a Kings uniform:
It felt good to get kind of the monkey off the back. Tonight was a good game, we played a lot better than we did against New Jersey, and obviously you have to bring your best when you play top teams in the league, and we played really well tonight. [Reporter: That was quite the fist pump there after that goal.] It wasn’t that big I didn’t think, but I mean, when you don’t score 50, sometimes you get excited when you score goals, so yeah, I threw a fist pump, I guess.

Versteeg, on if his excitement after his goal factored into it coming against Chicago:
When you play your old team you always want to play hard, it gives you a little added boost I guess, but at the end of the day, a goal feels good no matter who it’s against.

Versteeg, on the possibility of catching Chicago in the standings:
Yeah, that’s something we see, we want to work our way up the standings, we know Anaheim’s right there too in our conference, so it’s about trying to put ourselves ahead of the next team and try to keep winning every night.

Versteeg, on his line scoring on the same shift in a 18-second span:
I think the second goal is really big. I know playing for the Hawks, once you get down, they get pretty loose, and they can make a lot of plays when they’re loose and playing free. They had a lot of the puck and a lot of the play after that, but we stuck to it and played our game and ended up winning.

Versteeg, on if he felt chemistry playing alongside Kopitar and Lucic:
Well they’re such great players, I’m just trying to add to it whatever way I can and whatever line I’m with. I’ve played with a bunch of different guys so far in the first six games, so it’s just contributing to whatever line I’m on and helping this team win.

Drew Doughty, on the win:
It was a good game, everybody played well. I thought all four lines were good, and all three D-pairings, and obviously Quickie played well too, so it’s a big win, happy to beat them.

Doughty, on how the Kings’ checking game was able to stifle Chicago’s attack:
Obviously we tried to check them, that’s how we play, we try to play physical. They’re not a very physical team, they’re a more skilled team I guess you could say, so that’s what we tried to do, just play them physical and not give them a lot of room, especially those top guys, and I thought we did a pretty good job.

Doughty, on starting the game off with a pair of quick goals:
Yeah that’s big for us, I think they got two on one shift too, which is a pretty big deflator for their team, so from that point on, you could kind of feel that we were going to win that game. They were getting opportunities and stuff like that, they didn’t give up, but I felt like we were in control from that point on.

Doughty, on players who joined the team during the season contributing:
I think they’re all fitting in great. It’s pretty hard not to fit in with our group, we’ve got a great group here. On and off the ice we’re great friends and we love each other, and we’ll do anything it takes to complete the ultimate goal, which is getting to the playoffs and winning a Stanley Cup, and that’s all we’re looking forward to do.

Doughty, on how much having Quick in net boosts the team’s confidence when playing with a lead:
Obviously Quickie comes up with the big saves, but we’ve got one of the best defensive teams in the league. I’m pretty sure we’re in the tops for shots-against, goals-against and all those types of things, so that’s just defense as a team as a whole, and we played great that way tonight.

Doughty, on the chance to surpass Chicago in the standings:
Yeah, that would be great. Obviously we want to come out first in the conference if we can, but we have a lot of work to do. We’re still a few points back of other teams, but yeah, we have some big games coming up, a big one against Dallas tomorrow, and we’ve got to do the same sort of things.

Doughty, on how important it was to not allow Chicago to build any momentum:
When you get up two goals, they’re kind of given the green light to chuck pucks up the middle and throw pucks up in the air and have their forwards blow the zone and try to create offense that way, so it’s tough to play against them when they’re playing that way, but we did a good job, we just kept two D back, and a high F3, and that’s all we needed to do.

Doughty, on what he thought of Dustin Brown’s goal:
It’s good for Brownie to score, he obviously got a lucky bounce, that’s a tough play for Keith, but Brownie’s in the right spot at the right time, and he made a great move and scored a nice goal, so I’m happy for him.

Doughty, on if he would be surprised to see the Blackhawks again in the playoffs:
No, and hopefully we do. If you ask me, I could see them coming out of their side all the way to the Conference final, and obviously that’s where we want to be too, so there’s a good chance we could meet up at some point, and if we do, it’ll be a fun series.