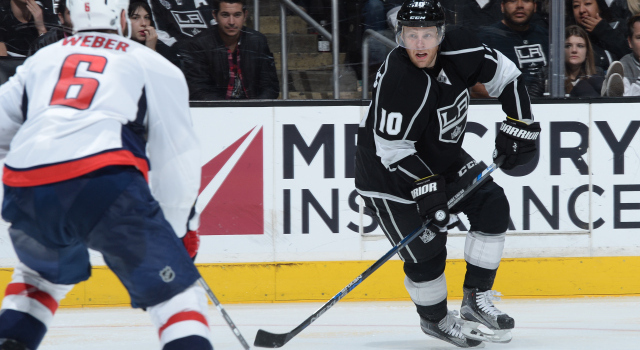 Tonight’s game reunites several players against their former team and teammates as Kris Versteeg and Rob Scuderi return to Chicago to face the Blackhawks. Christian Ehrhoff isn’t expected to play tonight, but the veteran defenseman spoke with reporters this morning about his transition between Los Angeles and Chicago.

Rob Scuderi, on whether he felt he fit in Chicago’s schemes:
I think it was probably a better fit in LA, I don’t think that’s criminal to say. I’m not going to be the first player in professional sports that wasn’t a fit in one place. It’s okay to admit that, and I’m glad that each party can move on.

Scuderi, on how excited he was when the trade to LA went through:
I was pretty excited to get a chance anywhere, really, given where I was, and to get an opportunity to play in the NHL is a privilege. But to know where it was going to be, back in Los Angeles, where I have some familiarity with not just the system and the coaching, but my teammates as well, it made it all that sweeter.

Scuderi, on whether the Kings take pride in being a big, heavy, physical team:
I think we have a lot of guys in here that take pride in finishing hits and making the game hard. I think when you look at the Kings the last few years, the thing that’s made them successful, especially in a seven-game series, is wearing another team down, and the physicality of the group is certainly one of those factors.

Scuderi, on the cultures of the Kings, Blackhawks and Penguins organizations:
It’s very similar, and I consider myself extremely fortunate to be a part of all three organizations, teams with a winning history who are trying to go for the Stanley Cup right now, and all three have the chance to do it. The cultures are the same, you have the same type of winning attitude within the room, in the fact that the guys want to push each other, become a better team.

Kris Versteeg, on whether the Kings’ offense needs to be elite in order to win a Cup:
Well, I think this team wins with kind of a four-line attitude. It’s not so much top-heavy, and it doesn’t have to score every night. I think this team defends well and checks first, and it’s obviously nice to get goals, but wins are what this team is all about, and I don’t think they care if they score one goal and win a game, or two goals.

Versteeg, on joining Anze Kopitar’s line during Saturday’s game:
It was good, it’s exciting to play with guys of those skills levels and qualities. They’re big guys, big bodies, they don’t need you to help them very much because they’re so great, so hopefully I can just add a little bit of what I bring to that line and help us get a big win.

Versteeg, on being back in Chicago:
It’s always exciting to come back and play old teams, it gives you a little added energy. That’s pretty much the biggest thing.

Christian Ehrhoff, on the Los Angeles-Chicago rivalry:
Yeah definitely, you see who’s won the Cups the last few years, and its Chicago and LA. Both teams want to get on top again, both are very competitive teams, so it’s a great match up.

Ehrhoff, on whether he experienced a “seamless” transition joining Chicago:
Yeah for sure, like you said they had a lot of change every year almost, they’re used to new guys coming in and they’ve made the transition really easy for me here.

Ehrhoff, on how Chicago’s culture compares to that of the Kings:
It’s similar, it’s a winning culture, everything is toward winning that last game of the playoffs, and in that way they are very similar. There’s some differences in the style that both teams play, but if you compare the culture, both teams want to win.

Ehrhoff, on being with the Blackhawks:
I’m happy to be here, I’m excited. Obviously in the end LA didn’t work out for me, it’s a change of scenery, I’m looking forward here to the challenge and moving forward toward the end of the season.

Ehrhoff, on whether he envisioned this situation during the end of his L.A. tenure:
That’s basically what I had hoped for, I knew there were discussions between Chicago and LA basically since I got put on waivers, or even before, so that was for me the best case scenario, to get another shot and still be on a great team that has a chance to compete for the Stanley Cup.

Ehrhoff, on why he thinks it didn’t work out in Los Angeles:
I don’t really know, I don’t really want to look back. I’m here in the now and I want to focus on what’s at hand with Chicago, that’s it.

Ehrhoff, on why Chicago seems like a better fit scheme-wise:
It’s just a different style of play, the defensive style is more like a zone play, defending more with your stick, and that’s something that can suit me a little better.