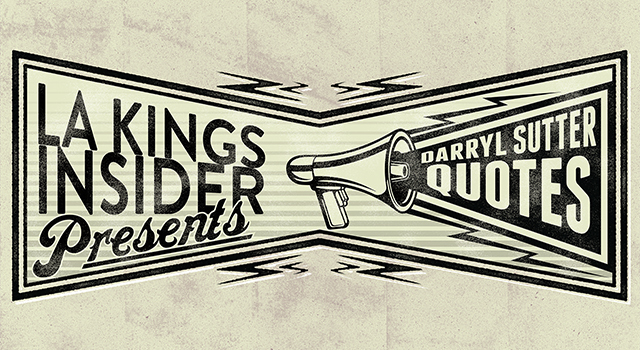 On how Kris Versteeg and Rob Scuderi have fit in with the Kings:
He played with the Kings a lot longer – basically Pittsburgh and LA – so it’s pretty easy for him to fit back in with our team, and we got Kris once we lost Gabby to get another skilled guy up front.

On whether the Scuderi-Ehrhoff trade was a “classic hockey trade”:
Yeah, two veterans. Good, quality guys. Different types of players.

On whether Tyler Toffoli’s scoring slump is due to a lack of finish or broader aspects:
If you’re in a scoring slump and you’re put in offensive positions a lot, meaning offensive situations, and you’re not producing, then that’s called a slump. I would say that’s not finishing. That would make sense.

On what he has liked about the team’s offense:
I think it goes game-to-game in this league. Everybody checks so well. I would say your big guys get open, nights that your power play works, things like that. The difference most nights.

On what has been absent from Toffoli’s game:
You know, most goals are scored around the net. Not many aren’t. And if somebody else scores it from farther out, somebody’s standing in front of the net. If you’re not getting around the net, you’re not going to score. We’re a team that’s generally a high-volume shot team. That means that there should be rebounds and there should be a lot of loose pucks around the net, and those are where you’ve got to go to score. You’ve got to go get the puck.

On whether there is “something extra in the air” when the Kings play the Blackhawks:
Well, the history would be that they won the Stanley Cup last year, and we didn’t make the playoffs. So for me, that’s the history.

On his impressions of Artemi Panarin:
He’s a dynamic player. He’s a great addition to anybody’s team, and give the Chicago Blackhawks a lot of credit for going to get that player and putting him into – obviously to fit into a cap situation like he did and to excel as he has is, he’s probably not only the rookie of the year, but he could get a lot of votes for other awards, too. [Reporter: Does it almost seem unfair that a team like the Hawks gets one of the best players out there?] I’m not into writing books on what’s fair and what’s not fair.

On whether the Hart Trophy race is between Patrick Kane and Braden Holtby:
I haven’t given it much thought. See where everybody is in a month. They should vote on all those awards in June, not whenever they do. Every one of ‘em.

On whether he enjoys the Los Angeles-Chicago rivalry as a “match-up” sense:
Your schedule, you put priority on your division games because you play more, and then obviously your conference games because somebody’s getting the extra home game and you know how much of an advantage buildings like this are to the home team, just with the crowd. And I don’t have to be much of a hockey genius to figure out that they are a great hockey team, but you look forward to the atmosphere and Chicago outside of the other team.