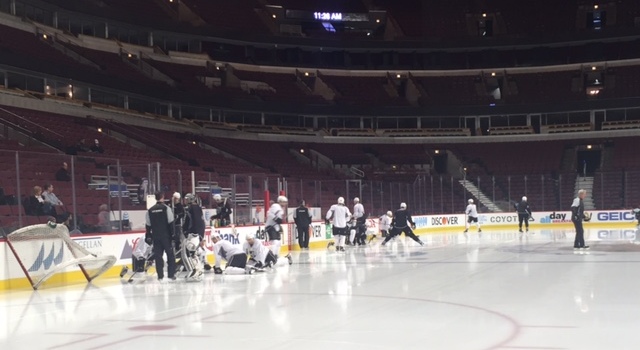 Hello from the team hotel, where the Kings have returned after a morning skate at the United Center. It was a full-team skate in advance of tonight’s game against the Blackhawks (5:00 p.m. PT / NBCSN / KABC 790 / I Heart Radio). 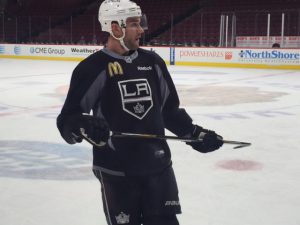 -Jonathan Quick left the ice first and will be expected to counter Corey Crawford and the Blackhawks. Andy Andreoff and Jamie McBain were the extras – they were actually paired together as a defensive pair during rushes – so don’t expect them to go tonight.

-Darryl Sutter had a lot of interesting things to say at the morning skate and shared several observations on Tyler Toffoli’s recent scoring slump. I’ll share those notes as part of a quotes transcript as well as a story on Toffoli’s recent play. But when asked whether he appreciates these late season games between the Kings and Blackhawks given the teams’ shared recent histories, he responded, “Well, the history would be that they won the Stanley Cup last year, and we didn’t make the playoffs. So for me, that’s the history.” Good stuff from Darryl to come.

-Kris Versteeg and Rob Scuderi will face many of their former teammates today, but it appears as though Christian Ehrhoff won’t be a go for the home team. Michal Roszival should draw back in for Chicago after missing Friday night’s loss at Dallas with a lower-body injury. Marcus Kruger (wrist) remains out for the Blackhawks, who are expected to ice a feisty fourth line of Brandon Mashinter, Andrew Shaw and Dale Weise. 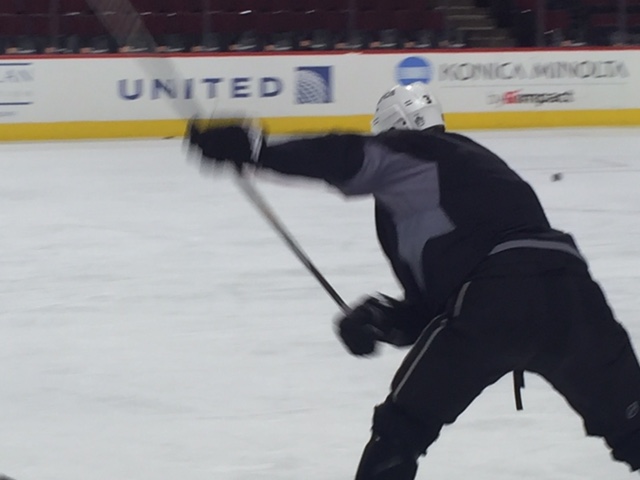