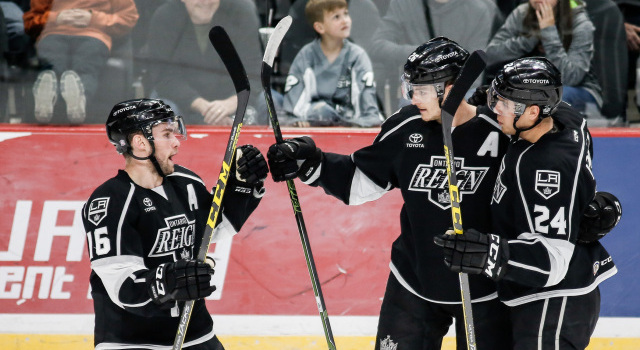 Reign game breakdown
The day after a tough OT loss at home to San Diego in which they scored just one goal, the Reign hit the road and rebounded in a big way on Sunday in a 4-1 victory over the San Jose Barracuda (26-21-6-3). Brett Sutter scored his first goal as a member of the Reign and the team’s first line of Michael Mersch, Nic Dowd and Sean Backman combined for two second-period goals as Reign (35-14-4-1) saw their magic number for a playoff berth trimmed to 11 with 14 games left. Peter Budaj stopped 18 of 19 shots he faced and the only goal the goalie allowed actually banked off Sutter’s skate. Justin Auger’s shorthanded breakaway goal in the third capped the scoring and Andrew Crescenzi (two assists) was one of four Reign players to have a multi-point game.

Three stars
–Nic Dowd – Dowd could have easily been credited with two goals in this game — and at one point he was as the AHL scoring officials went back and forth a bit on deciding the Ontario’s second goal. The Reign went up 2-0 just 1:09 into the second period when his shot from the slot, off a pass from Backman, glanced off Mersch who was providing a screen in front. Dowd struck for his 14th of the season with 6:45 left in the second period as he and his linemates cycled the San Jose zone, leaving the Barracuda out of position. Mersch moved and protected the puck behind the net before feeding Dowd in the slot and the center made no mistake in shooting to the opposite side to beat Barracuda Troy Grosenick.
–Brett Sutter – The newest veteran member of the Reign, acquired at the NHL trade deadline from the Minnesota Wild for Scott Sabourin, scored his first goal with Ontario in his fourth game. Sutter drilled a shot from the left circle high and by Grosenick to open the scoring at 6:55 of the first period. It was his fifth AHL goal of the season (four previously with the Iowa Wild) and his first since Feb. 6. Sutter has slotted in comfortably as the Reign’s third-line center and his goal was also his first point with the team.
–Michael Mersch — Despite playing in far less games than most of his teammates due to call-ups with the Kings, Mersch still leads Ontario in goals (21). The next closest is Backman, who’s four behind that and has played in 16 more contests than Mersch. His work behind the net before setting up Dowd’s goal was a smart, grind-and-wait effort. The left winger’s been a point per game player in his four games since returning from the NHL.

Turning point
With the Barracuda finally with a goal midway through the third and mounting a comeback attempt, Justin Auger stole the puck from defenseman Joakim Ryan and skated in on a shorthanded breakaway with just over 5 minutes to go. Auger used his speed to leave Ryan chasing and beat Grosenick cleanly on a deke that put the Reign up 4-1.

Stat fact
–4-for-4 – The Reign finished perfect on the penalty kill and that performance deemed crucial after they took three calls in the third period alone.

This and that off-ice
Reign goalie Michael Houser, on a conditioning assignment with the Manchester Monarchs, stopped 35 of the 36 shots he faced in a 3-1 win over Elmira on Sunday. It was his second win in his East Coast stint, where he’s gone 2-1-2-0.

Next up
The Reign are sticking around San Jose before another meeting with the Barracuda on Wednesday at 7:30 p.m. Monday will be a recovery day for the team before going back to work in practice on Tuesday.