Expect Toffoli to snap out of his slump soon 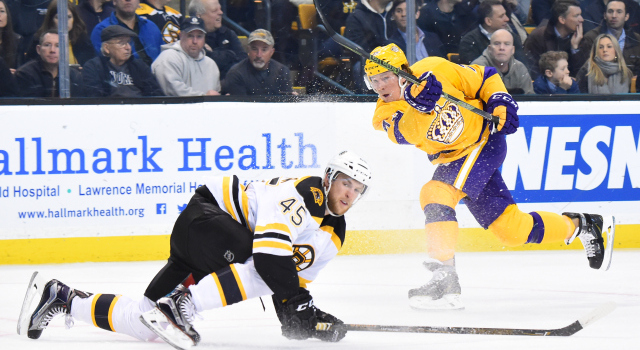 There’s no way to sugarcoat it – Tyler Toffoli is in a bona fide scoring slump.

Having gone goalless for 10 consecutive games and without a five-on-five tally dating 23 games back to January 17, the proverbial snakebite has affected the young sniper who still leads the team with a career-high 24 goals on the season.

“You just have to find a way,” the 23-year-old said. “Obviously it’s not the way I envisioned things would go, but it is what it is, and I’ve got to work my way out of it. It’s obviously not always about goals, but I’ve got to find my play and be consistent shift by shift and just get back to the basics.”

Plus-minus generally isn’t a particularly revealing stat, but his plus-28 rating, which ranks second in the league, indicates that the responsible and complete aspects of his game are still there. He continues to boast sterling possession rates, so this current slump is in all likelihood a simple market correction.

Toffoli, who shot 34.6% in October and was sitting at 17.5% prior to the game against Pittsburgh on December 5, is still shooting a career-high 13.5%. In five-on-five play, that rate dips to 9.9%, which is only one-tenth of one percentage point better than his previous 5×5 high-water mark and completely in line with his career averages.

In other words, this slump isn’t likely to persist for much longer. It very well could end tonight, as Toffoli has totaled seven goals, 13 points and a plus-eight rating in 17 regular season and playoff games against Chicago, a span in which he has posted a Corsi-for percentage of 58.4% (230 CF; 164 CA). Against a league behemoth like the Blackhawks, those are especially impressive numbers.

“You just have to play fast. They’re a really fast, skilled team, so you just have to be ready for it,” he said. “Move my feet, and when I move my feet, that’s usually when I create things, whether that’s offensively or being clean coming out of our own zone, those little things go a long way.”

In the eyes of Darryl Sutter, he could also stand to set up shop an inch or two closer to the opposing goalie.

Overthinking can wreak havoc on a young player’s psyche, but the Cup-hardened Toffoli, who scored four times in the 2014 Western Conference Final, places his focus on more acute game details rather than any broad scale developments.

“Obviously I’ve never been in a slump for this long, but I think the first couple games where I wasn’t scoring I was over-thinking, and now I’m just at a point where I just want to keep shooting and getting the puck to the net, and the more I shoot, the more it’s going to go in.”