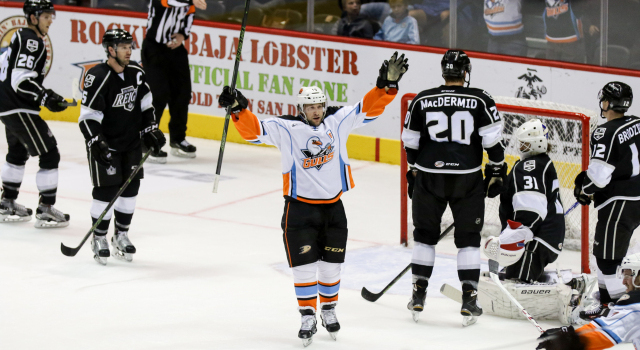 Reign game breakdown
Mike Sgarbossa scored at 3:42 of overtime and the San Diego Gulls (31-20-2-2) ruined the Reign’s homecoming after three weeks away in a 2-1 victory on Saturday night. A playoff-like atmosphere was felt throughout and the chippiness was alive and well early as the Reign’s Kris Newbury and the Gulls’ Shane O’Brien dropped the gloves just over a minute in. The Gulls took a 1-0 lead in the first period on a Nic Kerdiles tip of a Brandon Montour shot at 4:07. Fortunately for the Reign it was just a one-goal deficit going into the first intermission as goalie Peter Budaj stopped a penalty shot by Ondrej Kase with 1:19 left in the period after Kase was on a clear break and hauled down smartly by Jeff Schultz. It was a long time between home games for the Reign. After 21 days away from CBBA the Reign (34-14-4-1) took a long time as well to get going but finally got on the scoreboard as Adrian Kempe, playing in his first game since Feb. 20 due to an upper-body injury, broke the tie at 7:45 of the third period on a shot from the slot. That forced OT and set up Sgarbossa’s winner, also assisted by Montour as the Gulls improved to 6-3-0-0 against Ontario. Budaj finished with 18 saves and Anton Khudobin countered with 35.

Best quote
Newbury, on the rivalry: “You play them so much you learn to hate them. I mean, it’s our biggest rivalry we have here. I’ve never been in a rivalry where you liked the other team. It gets physical, it gets rough, there’s a lot of chirping. I think at some point the refs should understand and just let us play. I mean, it’s the game of hockey. We’re an hour and a half down the road from each other, it’s going to get rough.”

Three stars
–Brandon Montour – San Diego’s rookie points leader (9 goals, 36 assists for 45 points) assisted on both goals, the first being a deflection of his shot from the point off a faceoff win and the OT winner being a crisp pass to Sgarbossa. From the corner to the left of Budaj, Montour found a sneaky Sgarbossa, who got in behind Kempe for a one-touch shot right atop Budaj’s crease. It was Montour’s 10th multi-point game of the season.
–Adrian Kempe – In his return from missing four games with an upper-body injury, Kempe scored his first goal since Jan. 8. That game over two months ago was his first since his first back from the World Junior Championships. That’s how long it’s been. So, for Kempe to find the goal column on a high-glove whistler from the slot was encouraging. That was the highlight. But his missed defensive assignment in overtime resulted in Sgarbossa’s winner, a mistake Kempe owned up to in his postgame media session. That was, of course, the low light. In turn, Kempe did block two shots from the point by Stu Bickel on the same shift with just over two minutes left in regulation. Head coach Mike Stothers said afterwards he believes the Swede will learn from his mistakes: “His defensive assignment wasn’t great but he’s a young kid. He’s got to learn from those things. He’s got to play in those situations. As good as he is in the other team’s end, we need him to be that good in our end. He’ll learn from it.”
–Anton Khudobin/the glass behind him — The box score will tell you that the Gulls goaltender stopped 35 shots, 17 more than Budaj at the opposite end. What it won’t tell you is the multiple times the Reign shot high and wide on quality opportunities, particularly in the first period. Nic Dowd had at least two looks on odd-man rushes that went over the net. Jonny Brodzinski was part of that guilty party as well on another break in the opening period. “I think we spent the early part of the game shooting high,” Stothers said. “We weren’t even hitting the net. Their goalie was standing up and we were ringing it over his head and off the glass. You’ve just got to put the puck on the net. Put the puck on the net, make the goalie make the save. So, I think we needed to adjust the sights on our rifles there a little bit, bring it down a little bit.” Khudobin, who earned his 15th win, was strong though, particularly in shutting down two Reign power play chances early in the second period.

Turning point
Held off the board for 47:45 of this game, Kevin Gravel’s solo rush up ice started the play that resulted in Kempe’s goal. As Gravel got the puck deep, a forechecking play by Justin Auger made Gulls defenseman Shea Theodore uncomfortable enough to cough up the puck straight to Kempe’s stick in the slot. That play turned this one into a game and ultimately allowed the Reign to walk away with one point.

Stat fact
–27 – PIM for Kris Newbury in the first period (his only period) in this contest. Newbury, who fought Shane O’Brien just 1:07 in, picked up a roughing call, a 10-minute misconduct and a game misconduct for abuse of the official with 54 seconds left in the period after coming into a scrum late trying to defend Kempe.

This and that off-ice
Earlier in the day the Reign returned forward Maxim Kitsyn to the Manchester Monarchs. Kitsyn, who registered no points in two games, had been a healthy scratch the previous two games in San Antonio. … Goalie Michael Houser remains on a conditioning assignment with Manchester, but did not play in Saturday’s 7-4 loss to Reading.

Next up
Just as the Reign returned home, they’re back on a plane as soon as Sunday morning to face San Jose at 5 p.m. PT. Ontario is 7-2-0-0 against the Sharks affiliate this season.