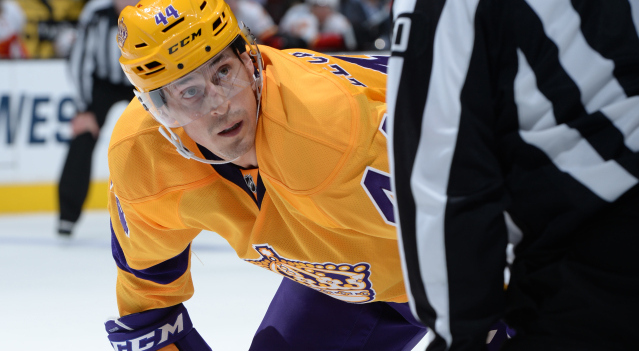 Overall, the Los Angeles Kings’ 15-10-2 record since acquiring Vincent Lecavalier and Luke Schenn is a lukewarm reflection of a healthy repetition of win-one, lose-one February hockey as the team dealt with a strengthening schedule and, later, injuries to key players.

And while both Lecavalier and Schenn have been well in the red when their possession rates are compared with their teammates’, a player’s Corsi-Rel is just a part of their overall evaluation, not the be-all, end-all of their value. Likewise, if the possession metrics are to be considered, so, too, is the team’s faceoff rate since Lecavalier has joined the team.

On the day that both Lecavalier and Schenn made their Los Angeles debuts, the Kings were tied for 20th with a success rate of 49.6%. In the 27-game expanse since then, the team has ranked ninth in the league with a 50.9% rate to push their overall mark up to 50.1%, which is tied for 13th in the league. This is because Vincent Lecavalier currently leads all Los Angeles centers with a success rate of 53.5% at the dot.

“I think over the years, maybe a couple of tricks, or you see other guys that are doing well, and I’m like, ‘OK, why is Bergeron in Boston at 60%?,’ and you kind of look at what he does and little tricks like that,” Lecavalier said. “But over my career, it’s been up and down. At the beginning of my career I was struggling a lot, I think I was in the low-40’s. It’s also a commitment, especially now in the game, there’s more details and you want the puck as much as possible, so faceoffs are obviously important because if you win the draw you have possession. It was something maybe in my first five-to-seven years that we really didn’t talk about, but now it’s more and more, and you want that puck and you want to keep it.”

The importance of being a top faceoff team is a semi-debate occasionally discussed across the league, and it’s a topic that has been previously been covered on this page. But given the importance he places on avoiding goals against off faceoffs, count Darryl Sutter as among those who place a very high importance on the faceoff, particularly in the defensive zone.

“Hey, guys are losing three or four minutes a game when you think about it, because you’re taking ‘em off the ice,” Sutter said earlier today in an extended look at the importance of faceoffs. “That’s also taxing the other way. That takes on a little bit more on Kopi. You’ll see Vinny going out together, like two guys going out, and you’ll tell them whether to stay or change and things like that. Where it’s become even more, as you go down the stretch and you go deeper into the season and you get into the harder part of the game, it’s like talking yesterday about guys that they’ve got to be hard, they’ve got to understand that it gets a lot tougher and not as much time and space out there. It’s the same thing in the faceoff thing. I mean, you’re trying to get some sort of match-up, especially if you’re on the road, if you lose a draw, you’re done. You don’t get those guys off, and a lot of times it ends up in your net. So it’s a really important part of the game that’s kind of got overlooked a little bit how important it how important it has been for us over the last few years.”

After Lecavalier’s 53.5% rate with the team, Kopitar ranks second at 52.6%. Nick Shore is also above water at a respectable 50.8% and, though there were icings involved in his extended deployment, received several key late-game faceoffs against Washington in a 3-3 tied game.

“I think one things that helps is you get used to going against certain guys,” Shore said. “If you’re facing off against someone multiple times, you start to learn their tendencies and stuff like that, that helps a lot. Like you said, the more you take over the course of a year or even during a game, you’re able to get into a little bit of a rhythm, so it helps.”

One challenge lies in the hands of Trevor Lewis. The traditionally stout checking forward has moved into a center role as Jeff Carter (49.0% on the season) has moved to right wing for the time being. Lewis is at 40.1%, which, as Sutter noted, means that Kopitar and others will be relied upon for a few extra draws, perhaps raising their usage during a tiring part of the season.

“We’ve dropped off a lot in our faceoffs, and you know what? It’s a learning thing, for sure, but you want to be in the top handful in the league, and it’s hard. It’s really hard to be a good faceoff man,” Sutter said. “We have some young guys, they’ve been really good and really bad. Basically, we have to get better. Whether that’s a summertime or that’s a development thing, whether that’s a straight faceoff guy – I know Nelly’s worked a lot with guys on their technique – and the difference between playing in the American League and playing here for a lot of guys is that, or ice time here.”

Vincent Lecavalier, on any challenges of learning new faceoff counterparts in the West:
I think you kind of learn about guys, well we have our iPads before the games, we look at how they do it, there’s a lot of new players in the league, so during the game you kind of try to figure out what he does. There’s some pre-scout I guess, but there’s also some during the game, some guys might try some different things, and you might try to counter it and try to win it.

Lecavalier, on whether he’s been comfortable with his transition:
I feel really good. The way we play, the structure this team has I think makes things a lot easier as a player, there’s no grey areas – I mean there are, but everything’s very well structured, there’s a lot of videos, a lot of stuff like that so you always be doing the right things out there. But yeah, I feel really good.

Lecavalier, on faceoff importance “not just a power play thing”:
No, all the time, yeah I think the percentages go up on the power play if you win the draw, but defensively as well, you want to get out of your zone and go play in the offensive zone, so wherever the draw is, they’re important. When it comes down to the last couple minutes of the game, obviously those ones in your zone are the ones you really try to bear down on and try to win.

Lecavalier, on playing with Tanner Pearson and Tyler Toffoli:
It’s been good, I think we play well together, I mean both guys have a lot of speed and they’re quick on pucks, so you know, it’s been going very well. {Reporter: Are they teach you, or are you teaching them?] I just think it’s a combination, we’re all helping out each other, we’re communicating, looking for each other in the zone. It’s been going well, just keep progressing as a line and keep ‘er going.

Nick Shore, on whether practicing faceoffs against Kopitar and Lecavalier helps:
Well yeah it’s something you need to work on, faceoffs are such a huge part of the game now. You win a faceoff, you start with possession, we all know how important that is. You can definitely learn a lot working with guys like Kopi, Vinny and Carts, pick up different things that they do and try to sort of implement them into your strategy when you’re taking faceoffs.

Shore, on whether he relies on video or in-game experience for faceoff success:
I think it’s both, you’re able to watch video on guys, you’re able to go through their centers and pick up on certain things, but I think nothing’s better than in-game experience and facing off guys, and once you get multiple reps, and like I said, in that rhythm in going against a certain guy, it helps.

Shore, on the toughest players across the league he’s taken faceoffs against:
It’s hard to say, there are so many guys around the league now that are so good at faceoffs, and I think going into the game, you really know who’s going to be taking those faceoffs for the other team and it’s something you pay attention to, a lot of guys will just take them on their backhand and things like that. I think it’s just being aware of what certain guys do and kind of go from there.