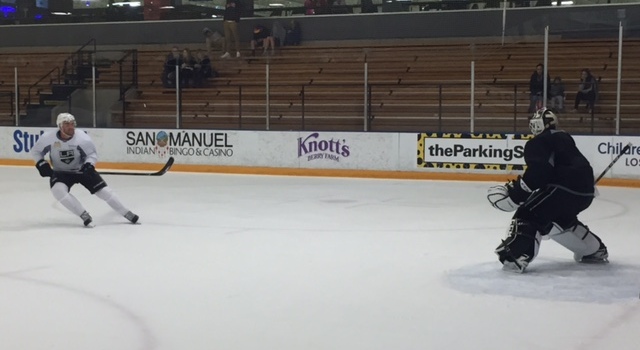 Hello from El Segundo on a bright Saturday morning. Tonight the Kings will face off against the New Jersey Devils for the second and final time this regular season (7:30 p.m. / FOX Sports West / KABC 790 / I Heart Radio). Let’s get down to brass tacks.

-There wasn’t much to report from the morning skate as Los Angeles’ participation was optional and not all players took the ice. With that said, expect yesterday’s forward lines to hold up. Don’t expect any lineup changes as Jamie McBain and Andy Andreoff remained on the ice for extra work with Jhonas Enroth and Matt Greene, who continues to adhere to a regular rehabilitation regimen. Jonathan Quick left the ice first and is expected to get the start against New Jersey.

-Keith Kincaid will draw the start for the Devils, whose morning skate at Staples Center is underway. Mike Cammalleri (hand/wrist), Patrik Elias (knee), Jordin Tootoo (upper-body), Jacob Josefson (upper-body) and Cory Schneider (knee) are among those out who won’t play for the visitors tonight.

As for any New Jersey lineup changes following their 3-0 win in San Jose two nights ago, decisions could be made closer to game time.

“We don’t know that yet,” Head Coach John Hynes said yesterday of potential lineup changes, as reported by Tom Gulitti of the Bergen County Record. “We played a good game [Thursday] night, but we’ve got some guys that were banged up that we held out and then a lot of guys didn’t skate today. So, we’ll have a morning skate [Saturday] and see how guys feel and make some decisions.”

Via Gulitti, 22-year-old wing Reid Boucher has been providing quality minutes; expect to see him featured tonight. The Devils rank last in goals per game but have the seventh best goals-against per game rate in the league. In Newark on February 14, New Jersey defeated Los Angeles 1-0 behind Kincaid’s 28 saves in a manifestation of both teams executing their systems play effectively; this shouldn’t be a back-and-forth, chance-trading game tonight.

-More to come shortly, including some interesting Darryl Sutter observations and a look at the Kings’ evolution in the faceoff dot since Vincent Lecavalier’s arrival. I may shorten several features throughout the afternoon to prepare for the broadcast and to get ready for tonight’s Business of Hockey panel, but there’s still plenty more to come, Insiders.