What’s the protocol for retrieving a milestone puck? 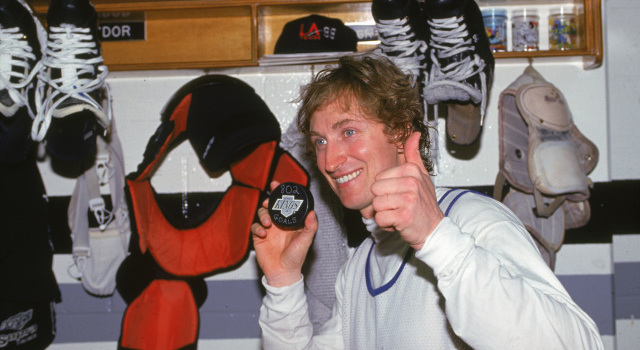 The Kings were leading the Canucks 4-1 at Staples Center on Monday when the visitors, during the latter half of a late power play, decided to pull Ryan Miller to add some offensive punch to their man advantage.

Los Angeles cleared the puck, and to the left of the empty net, Matt Bartkowski’s pass up the middle was intercepted by Jeff Carter, who deposited the puck into the open cage for his second goal of the night and the 300th goal of his career. Anze Kopitar instantly retrieved it.

“I mean at that point, what was it, 4-1, right?” Kopitar said. “So, you know, it was just one of those things where you don’t think about it but as soon as it happens it pops into your head, and then you go in there and grab the puck.”

It had popped into his head because, as it turns out, players do read the game notes and stat packets, not necessarily to see where they stand amidst their teammates or league leaders, but to be cognizant of upcoming milestones.

“Yeah, guys are aware of it, probably not so much to congratulate you, but because if you do hit a milestone then you’ve got to put money on the board, so they all want that,” Carter joked. “It’s all in the stat packs when you’re getting close to them, but for the most part guys are pretty much aware of it.”

And even though there exists the hockey fog of war during a third period of a late season game, Kopitar was still aware that Carter opened the night needing two goals to reach 300 and had already scored earlier in the night.

“We were actually just kind of joking around with Carts because he was in I guess you could call a bit of a slump because he hadn’t scored in a long time,” Kopitar said. “We were conscious of it that he’s reaching the 300, but he said ‘if I keep going at this pace it’s not going to happen anytime soon,’ so that’s why I knew. When he got that goal against Van, I knew that he was at 299 too, and we actually talked about it on the bench and told him ‘hopefully they pull the goalie and we can get it out of the way.’”

So it has been said, and so it shall be done. But what’s the cutoff? Is it just goal, point and shutout milestones?

“The one that I would’ve noticed the most would be a guy like Vinny, who’s going to get his 1200th [game played] in,” said Sutter. “That’s the one I’ve noticed more.”

Sadly, there won’t be any pucks retrieved when Lecavalier hits that nice round number. Should he remain healthy and in the lineup, it would be Tuesday’s game in Dallas.

“Games played, no,” Kopitar said of when it would be expected to retrieve a milestone puck. “Goals – you usually do 100, 200, three, four, whatever. Points you do, but I feel like it’s 500 points and probably the one-thousandth point if you do get it. Assists – I don’t know. Probably some guys do it, some guys don’t.”

So cross your fingers, 98 career-assist man, Rob Scuderi. And lest anyone forget, there’s always the officials to fall back on.

“Sometimes when you figure it out after, the ref usually goes in there, and you go and tell the ref that we’d like to have that puck and that’s about it,” Kopitar said.

It’s remarkable that players, especially on a team that relies on airtight systematic and positioning play, would have the wherewithal to immediately recognize the importance of a hallmark moment in a player’s career, even sometimes before the broadcasters and reporters. They’re gestures that don’t go unnoticed.

“The focus is always on trying to win, but certainly there’s game notes floating around, and you’ll see that they mention it usually in kind of a highlight portion, maybe of milestones that are coming up,” Scuderi said. So, guys are aware of it, and even though it’s an accomplishment for an individual, I think that as an individual, you appreciate that the team recognizes it and kind of pats you on the back for it.”